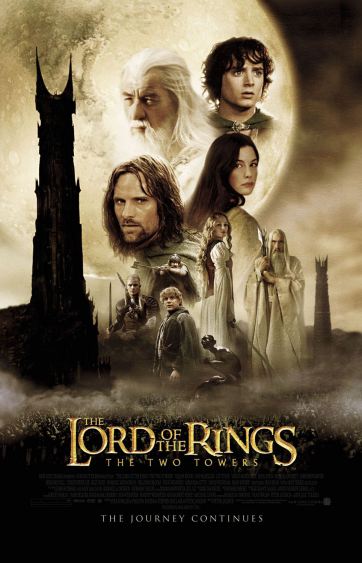 Waltzing backward through The Lord of the Rings, this week we highlight the middle section: The Two Towers.  This was always going to be the most difficult film in the trilogy if, for no other reason, the source material was going to have to be completely rearranged.  In The Two Towers, there are two very distinct books: one follows the hobbits and Gollum; the other follows the rest of the Fellowship to Rohan and Helm’s Deep.  Weaving those two together as masterfully as they did was one of the most impressive aspects of the adaptation.


The Two Towers also really introduced Gollum.  Previous experience with all-GCI characters at the time was pretty much Jar Jar Binks so people (and by people I mean me….bugger you all, it’s MY favorite book) were nervous.  Andy Serkis should have been nominated for an Oscar for giving a digital creation the movement and emotional weight of a living being.  What really sold Gollum has always been the nuance of his face, especially his eyes, which animators take whole from video tapes of Serkis’ performance.  This scene is actually not in the books, but it’s an example of how to take information parceled out over different books in bits and pieces and bring it together into a scene of showing not telling the audience who this bug-eyed crawler is.  In the middle of the night, Gollum and Smeagol have a full on schizoid episode, arguing with each other about the hobbits and the fate of the Ring.  It’s hysterical and haunting and my favorite scene from The Two Towers.