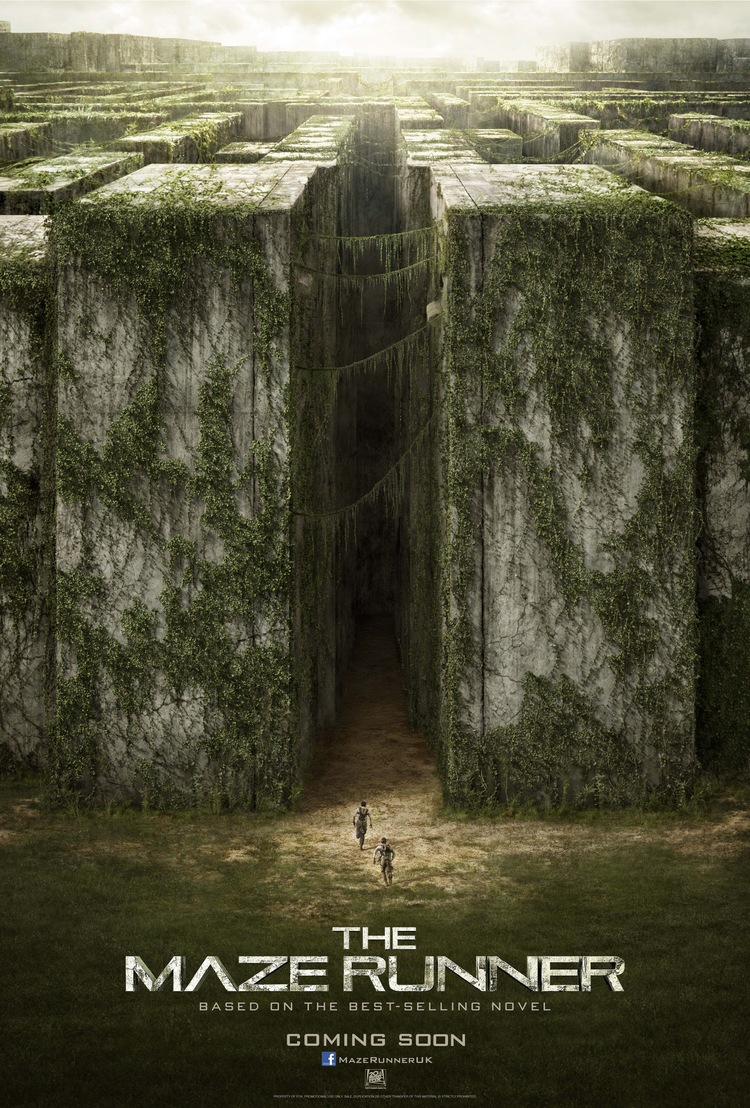 I cannot wait for this one and I have the book on my kindle and need to read it so if anyone has, please chime in, but I’m just so happy there’s finally a male protagonist in a dystopian future again. The “Katniss Effect” have locked dudes into supporting roles for years now and it’s good to see we may be making a comeback in something good (especially since Divergent looks like it’s going to get critically slaughtered by Kermit & Company). The Maze Runner opens September 19, 2014

The Maze Runner is one young adult book series that I’m actually looking forward to seeing adapted for the big screen. This has the potential to be an awesomely fun movie. The book was written by James Dashner, and the story centers on a group of teens who find themselves dropped into an epic maze as part of a mysterious test. This is the first teaser poster for the movie, and the first trailer should be coming tomorrow, so stay tuned for that.


The movie stars Teen Wolf actor Dylan O’Brien, Will Poulter, Kaya Scodelario, Aml Ameen, and Thomas Brodie-Sangster. It’s being directed by first-time feature film director Wes Ball. I love what I’ve heard of the story and seen from the concept art, and I can’t wait to see the trailer.

The studio is already in the process of developing the sequel. I’m hoping that this movie turns out to be great!

Here’s a more detailed description of the story:

The story begins with the lead character, Thomas (played by Teen Wolf‘s Dylan O’Brien), awakening inside a rusting, rumbling industrial elevator, which ascends from some unfathomable depth — into a peaceful meadow. He has no idea who he is or where he comes from. “The doors open and deposit him in this rustic, idyllic place surrounded by walls on all sides,” says Ball.

Thomas also finds himself surrounded by a ragtag group of other boys his age. “He is just one of many boys who have come up once a month in the last three years,” Ball says. They also have no idea who they are or how they got there, but they’ve pieced together a few things about the creepy walls that surround them.


Each morning, the barriers slide open. There is no other way out of the glade. “They have been trying to figure out how the hell to get out of this place and deal with the maze beyond the walls,” Ball says. “The doors open in the morning and the boys have to get back before they close because nobody survives a night in the maze.”

There’s something out there that preys on the ones who stay out too long. The kids call the creatures Grievers, though none has ever actually seen one (and lived.)

Most of the kids are content to stay within the confines — and relative safety — of the glade, even if it means never knowing why they’re there, or if anything lies beyond. Something must be, right? Something built all this and put them there. Only the bravest of the boys are willing to venture out to look for escape.

A moment like that is what Ball hints at amid the tiny figures in this concept drawing. ”Thomas is the boy who takes that step forward when everybody else takes a step back,” he says.


Another challenge: the maze changes every day. Despite its imposing size, the walls somehow shift in the night, and so those who run out to map it tend to find their efforts useless the next day.