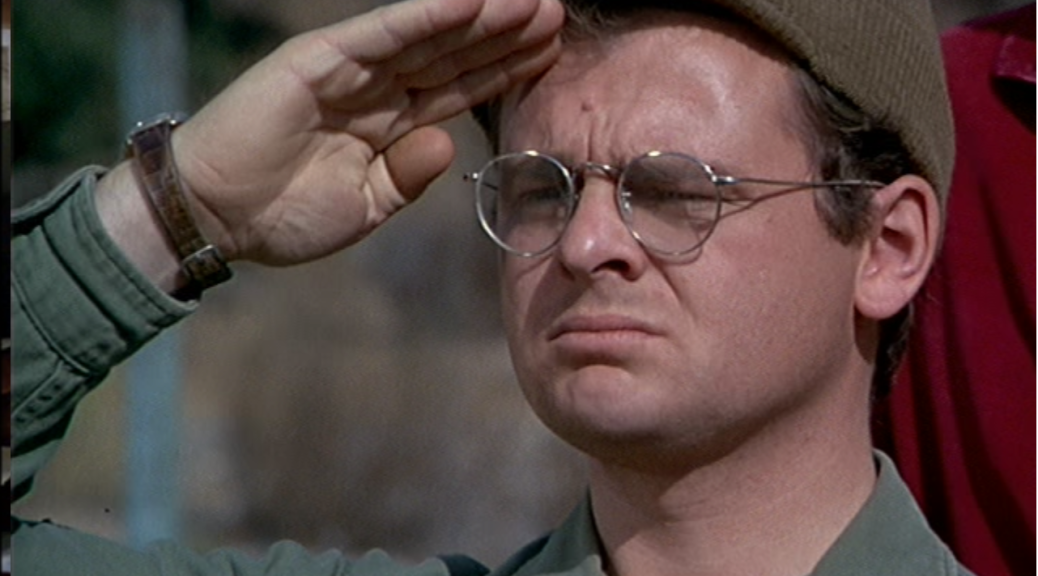 This is the moment that changed what the stakes could be on a television show forever.  Up until the third season of MASH, your main characters were safe.  Oh, they’d get into trouble, but they weren’t going to die on you.  MASH was the right show to shatter this illusion.  For three years they’d been killing off nameless soldiers, and pretending that death was something that happens to other people; never your dearest and closest.


I’ve included an excerpt from MASH show runner Larry Gelbart’s autobiography where he goes into detail about the scene and debunks the rumor that no one knew what was going on until the crushing final scene of the finale for season 3.  Radar, in a stupor, clutching a telegram in his fist, walks into the operation room and informs everyone that Lt. Col. Henry Blake, the show’s clueless and affable chief for the first three seasons, who had gotten his discharge earlier in the episode, that Lt. Col. Blake’s plane had gone down  over the Sea of Japan.  There were no survivors.  The operating room just goes stone cold quiet for a moment, but then they have to turn off that part of their humanity and go back to work; they’ve got open bodies on the table.  It was shocking.  It was brilliant.  No character ever felt safe again. 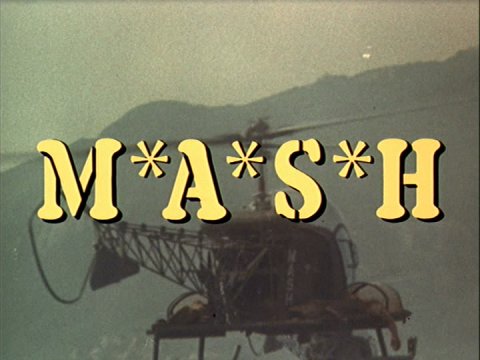 Larry Gelbart confirmed that account in his own book, Laughing Matters: Although the cast (with the exception of Alan Alda) was in the dark about the episode’s resolution until the last minute, it was not “kept a surprise from the cast until the moment when Gary Burghoff’s character ran into the operating room to announce the news”:

[T]here was no precedent for the last episode of our third season, in which the character of Colonel Henry Blake died. Naturally, CBS did not want us to “kill” the Henry Blake character, played by McLean Stevenson. They were most upset about that, and so was sentimental, dear old Twentieth Century-Fox. Killing a character in a half-hour show had never been done before. That was all the reason [producer] Gene [Reynolds] and I needed to know we would have to do it. 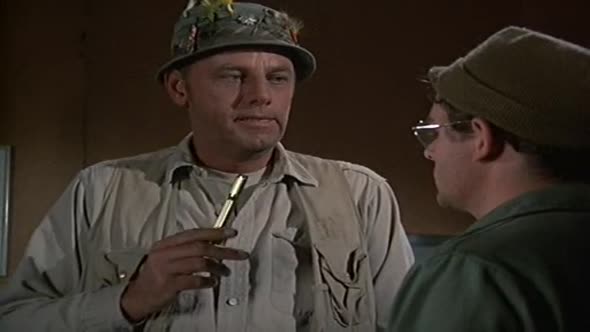 We resolved that instead of doing an episode in which yet another actor leaves yet another series, we would try to have Mac/Henry’s departure make a point, one that was consistent with the series’s attitude regarding the wastefulness of war; we would have that character die as a result of the conflict. After three years ofshowing faceless bit players and extras portraying dying or dead servicemen, here was an opportunity to have a character die that our audience knew and loved, one whose death would mean something to them. distributed the finished script to the cast and various production departments, but removed the last page, which called for Radar to enter the O.R. and read a Defense Department communiqué that informs everyone that Henry Blake, who had been discharged and was flying back to his family in the States, had gone down in the Sea of Japan. “There weren’t no survivors,” he concludes.

I kept that one last page under wraps, locking it in my desk drawer. The only cast member let in on the secret was Alan Alda, by then clearly the star of the series. We planned the production schedule for this episode so that the O.R. scene would be the last one shot. There were, in fact, two O.R. sequences in that show: one at the top of the show, in which Henry is informed by Radar that he, Henry, is going home, that he has received his discharge orders, whereupon everyone in the room breaks into raucous song; the second, of course, was the final scene in which Radar enters to read the communiqué announcing Henry’s death. After we shot the first scene, the one in which Henry gets the good news, the cast and crew, understandably, began to wrap, pulling the plug on the episode and for that matter, the whole season.

There were a great many visitors on the set: spectators, press, family, friends, easily a couple of hundred people. We asked everyone to wait a few minutes before joining us in the traditional wrap party, that we had one more piece of business to finish. I had couple of words privately with Billy Jurgensen, our cinematographer, told him what was up, and asked him to position his camera for the one additional scene. I did not want to rehearse it; we would shoot it only once. Then, Gene and I took the cast aside and I opened a manila envelope that contained the one-page last scene, telling them I had something I wanted to show them.

“I don’t want to see it!” Gary Burghoff exploded. “I know you! You’ve got pictures of dead babies in there!”

Assuring him I didn’t, I gave each [actor] a copy of the scene to read to themselves. Each had a different reaction.

“You son of a bitch,” Gary said to McLean. “You’ll probably get an Emmy out of this!”

Mac, who had stayed to watch the filming of what he knew was his last M*A*S*H , was speechless. But that doesn’t begin to say it. 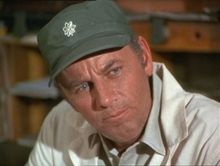 We returned to the set. For once I said “Action” instead of “Cut.” We began to shoot the scene. Gary was unbelievably touching as he entered the busy O.R. and read the message to all the doctors and nurses. Extras in the scene, performers who had been with series since day one, reacted with a kind of heartfelt sincerity that was stunning — their performance was based on their real surprise and lingering shock, their awareness of how much Mac meant to them. The crew, hearing of Henry’s death for the first time as the cameras were rolling, stuck to their chores; they did all one could ask of them.

Unhappily, there was some sort of technical glitch. Either the boom mike or a light or whatever could go wrong did, and we had to shoot it again. I was heartsick. Gary would never be able to do a second take as beautiful as he did the first. I still knew nothing about directing. He was better. And on the second go, a totally unexpected thing happened. After Gary finished reading his message, there was a hushed silence on the set as B.J.’s camera panned the stricken faces of the cast, and then someone off-camera accidentally let a surgical instrument drop to the floor. It was perfect, that clattering, hollow sound, filling a palpable void in a way that no words could. I could not have planned it better; I wish I had — whenever I happen to hear it again, I marvel at how perfectly it fit.