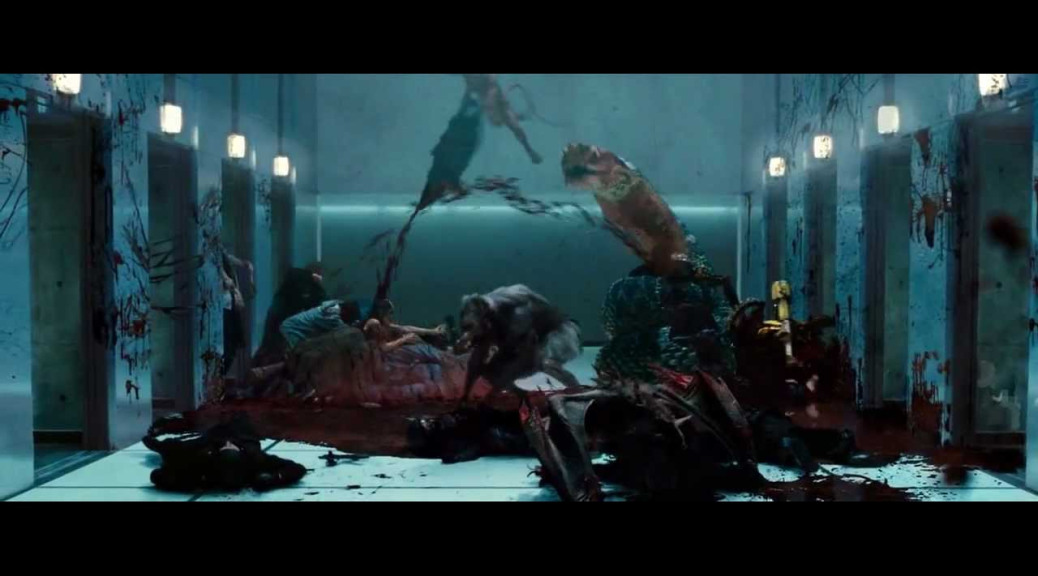 I hate horror movies.  Well, no, that’s too wide a statement, but for the most part I find the genre as eye-rollingly predictable as I do romantic comedies.  Then, every now and again, one comes along and scares the bejeebers out of me and I do appreciate those.  The Cabin in the Woods is the horror movie for people who love everything about horror movies, no matter if they’re good or bad.  Joss Whedon and Drew Goddard, the team behind Angel and The Avengers and Daredevil while we’re at it, wrote this amazingly plausible reason to have these contrived situations arranged for a purpose.


I don’t want to give away the plot for anyone who hasn’t seen this, but there’s a point at which the monster stable used in the scenarios we’ve all seen a thousand times…..um……gets loose in an office complex.  It is spectacular and WARNING spectacularly bloody (I’m not kidding, this is a massacre) so if you haven’t seen the film and this is out of context, you may not appreciate why this isn’t really so much horrific as it is hysterically funny.  If you haven’t seen this, DO.  Brilliant spring surprise from three years ago that makes every crappy horror film I’ve ever seen worth it.

I know it’s kind of cheating to throw in a bonus, but if any scene in the whole film sums up the tongue-in-cheek, twisted meta horror that makes this film so brilliant it’s this bit when Bradley Whitford puts THE HARBINGER on speakerphone to mock him while he delivers portents of doom.

One thought on “My Favorite Scene: The Cabin in the Woods (2012) *Every Monster Ever Including Angry Unicorn*”