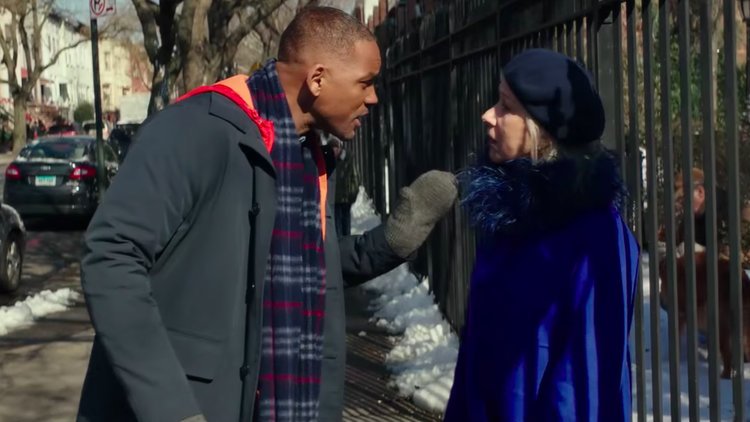 Collateral Beauty stars Will Smith as a man in the aftermath of an unspeakable tragedy.  His way of coping of it is by writing letters.  Not to the deceased.  They tell you to do that in grief counseling and sometimes it helps.  Smith is writing letters to Death, Love, and Time.  And mailing them.  This has his friends understandably concerned, but not as concerned as Smith when Death (Helen Mirren) shows up with one of his letters in hand.

The trailer looks very treacly and, I would dismiss it out of hand, except it has a cast with Helen Mirren, Kate Winslet, Michael Pena, Edward Norton, Keira Knightley, and Naomie Harris.  That’s a high-powered ensemble around a great star like Smith to begin with, and I’m glad Smith is trying different things and attempting to tap into his more dramatic side instead of making Men in Black 15.  Howerver, treacly trailer aside, there are two huge red flags for the film:
1. Audiences do not like sad Will Smith.  They don’t want angsty, tormented Will Smith, or emotionless Will Smith (Seven Pounds, After Earth).  So the degree to which the movie succeeds, and given the time of year of release, it’s almost A Christmas Carol with Love, Death, and Time taking the places of the ghosts.  That could be really good, but if it’s too stark audiences won’t flock to it no matter the reviews.
2. And this is the one that really makes me think this film is not a high-caliber, Oscar release.  It’s opening against Rogue One: A Star Wars Story where it is going to get absolutely obliterated at the box office.  If you wanted to bury a film that had five Oscar winners or nominees where no one would find the body, that’s exactly where I would put it.


I, personally, love Will Smith, and hope that I’m wrong and since the awards will ignore Rogue One no matter if it’s the greatest film ever made, give it some life  and it gets good reviews, I will be happy to be wrong, but the signs aren’t good for Collateral Beauty.  The film will open December 16, 2016.