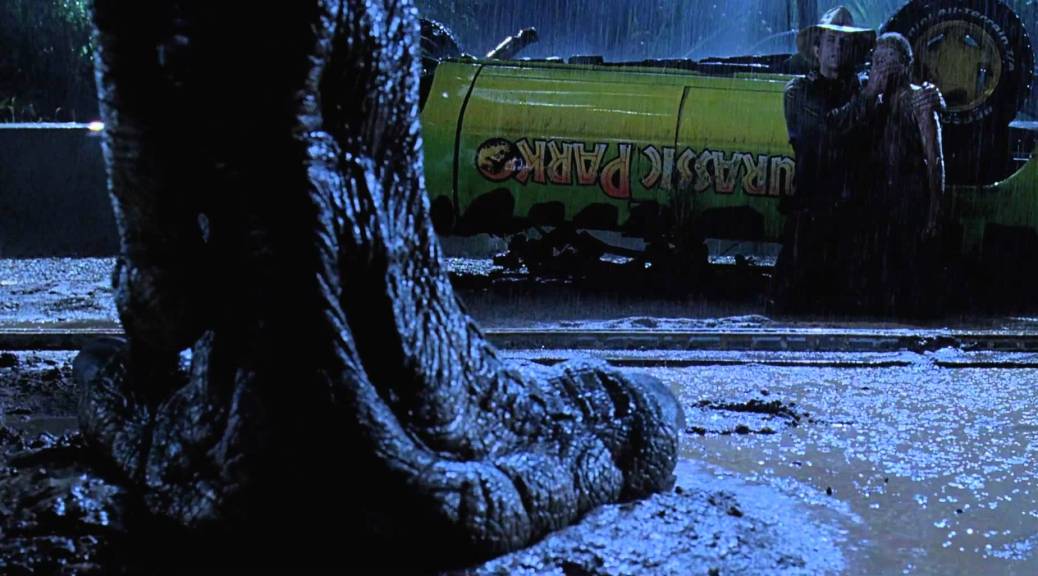 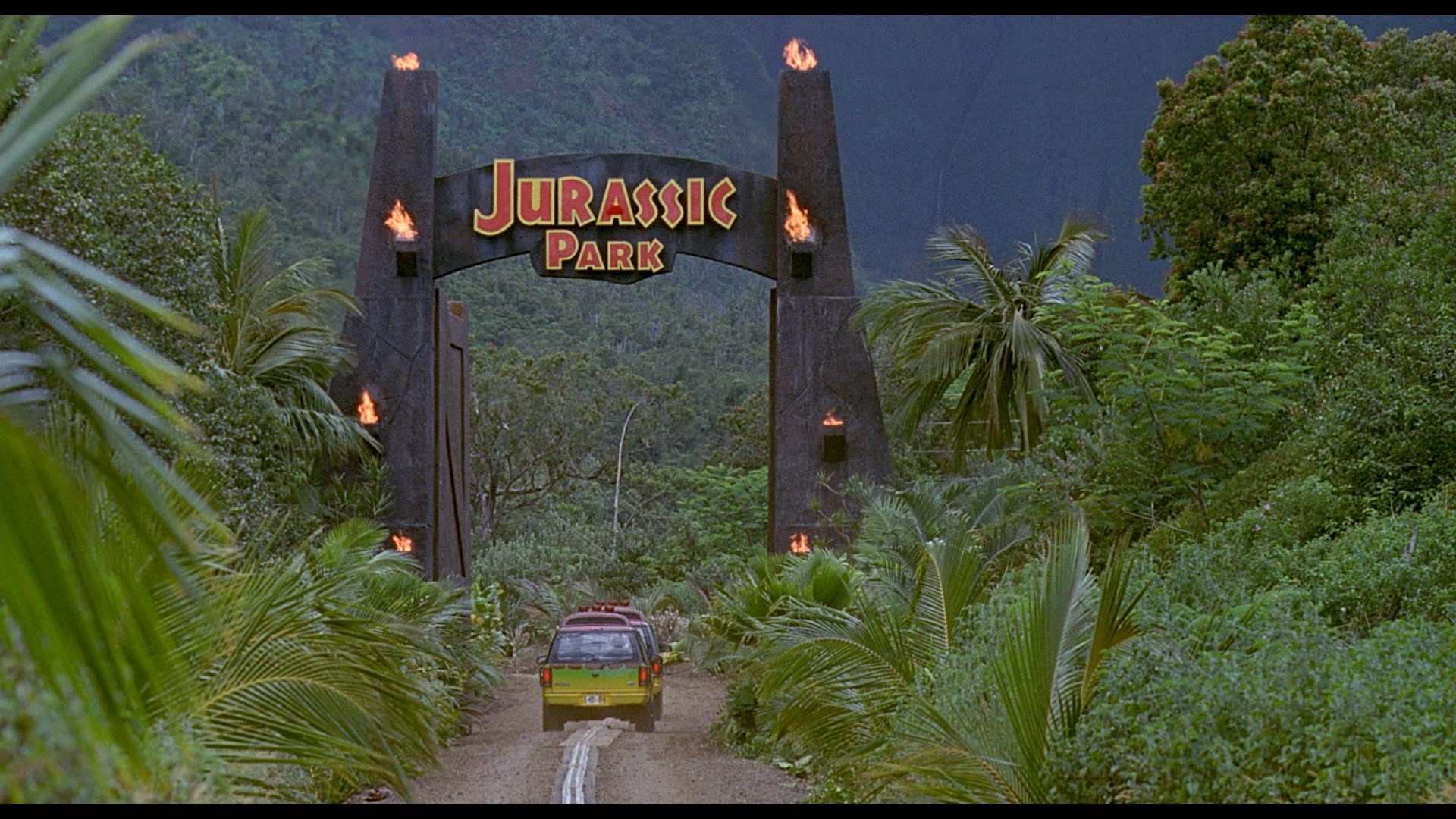 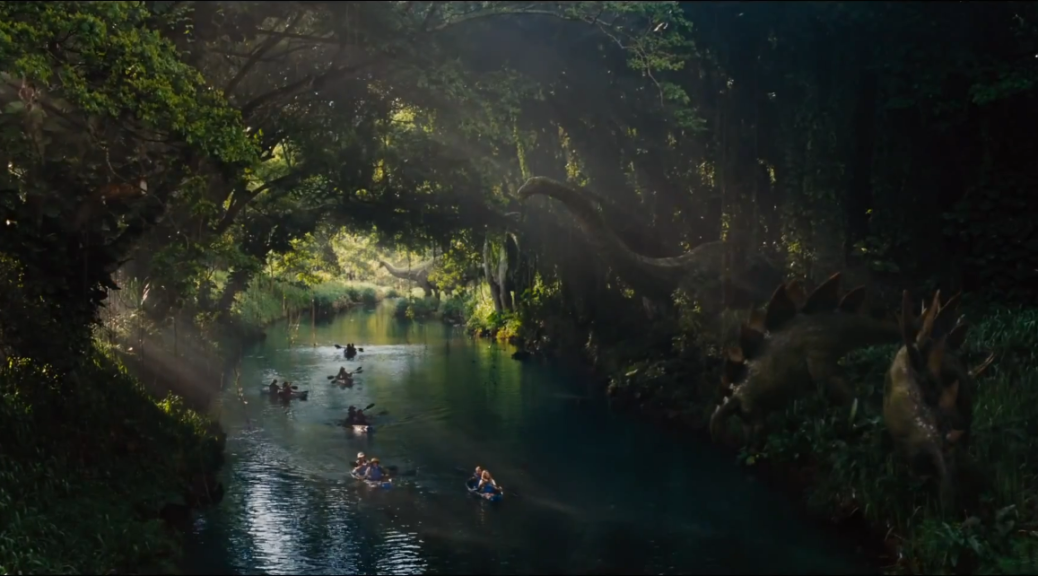 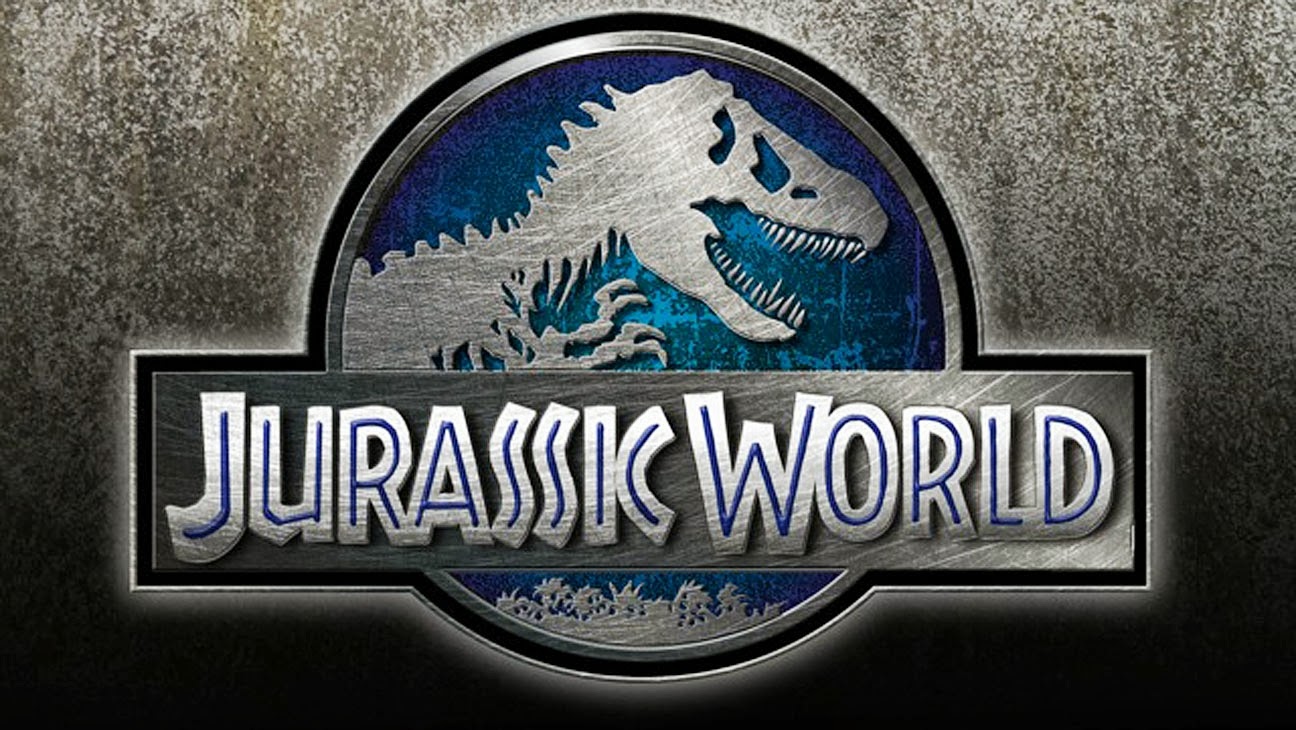 Jurassic Park was the first PG-13 film I was “allowed” to see in the theaters, and as it has turned out, every subsequent Jurassic film has come out during a period when I lived in or was visiting West Virginia, as I have been this week.  That movie experience of seeing dinosaurs come to life in, what I still think, is one of the best action/adventure films of all-time, remains indelible to this day.  The subsequent installments….not so much.  If you’re looking for a quick, spoiler-free review, Jurassic World is the best and most logical sequel to the original film; however, if you’re looking to recapture the glory of 1993, you’re going to leave seriously disappointed.  It will make a boatload of money and, if my audience’s reaction was any indication, leave us looking for more dinos in the future. END_OF_DOCUMENT_TOKEN_TO_BE_REPLACED

While not quite as egregious as the second Terminator: Genisys trailer, the second trailer for Jurassic Park 4 gives away WAY WAY too much of its plot.  Now you can play shell games in the trailer with the plot when your movie is going to have a complex one (Chris Nolan is famous for doing this with his trailers and sucker punching viewers with preconceived notions).  However, this movie is about dinosaurs eating people.  The first film and novel had a clever plot to make that possible, but once we have the dinos and the humans together…..really all we want to see is dinos eating chubby tourists.  So why Universal did the same boneheaded thing FOX did and give away pretty much their whole plot just boggles my mind.

Honestly, and this is no good for my page stats, but if I were you, I’d skip this trailer.  You know if you’re going to see this or not already and this does nothing to change that.  I wish I didn’t have to watch them to write these pieces, but my advice would be to just go watch some human munching and decide how good the film is with the information you already have when it opens on June 12, 2015.  Also released over the weekend were three new promo posters for the film featuring Jessica Chastain and a large set of chompers, Chris Pratt and his trained velociraptor squad and the gigantic, alligator-like Mossasaurus. 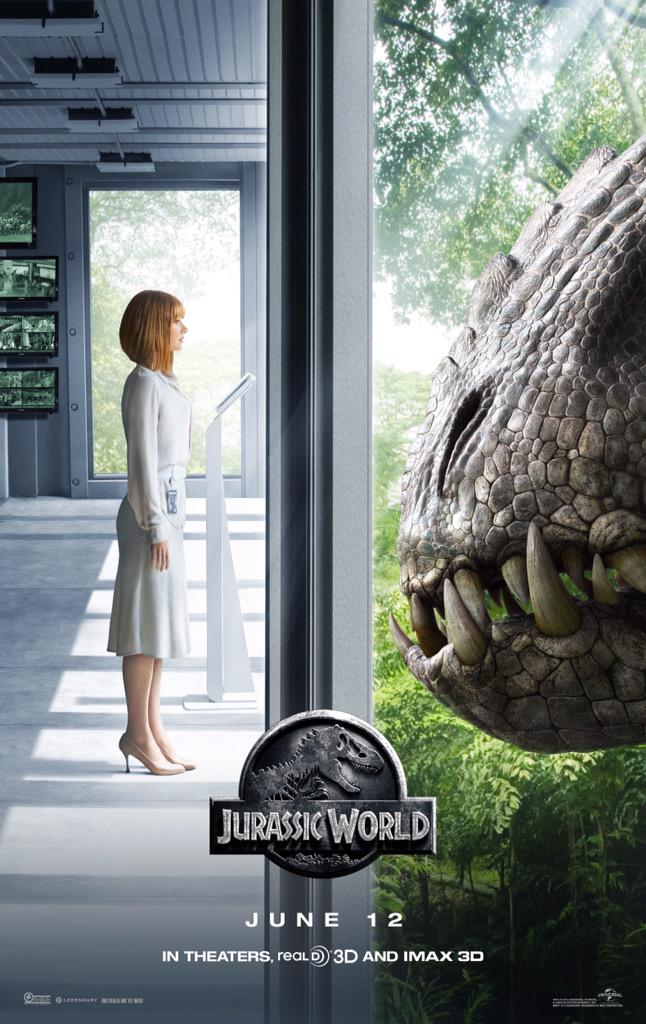 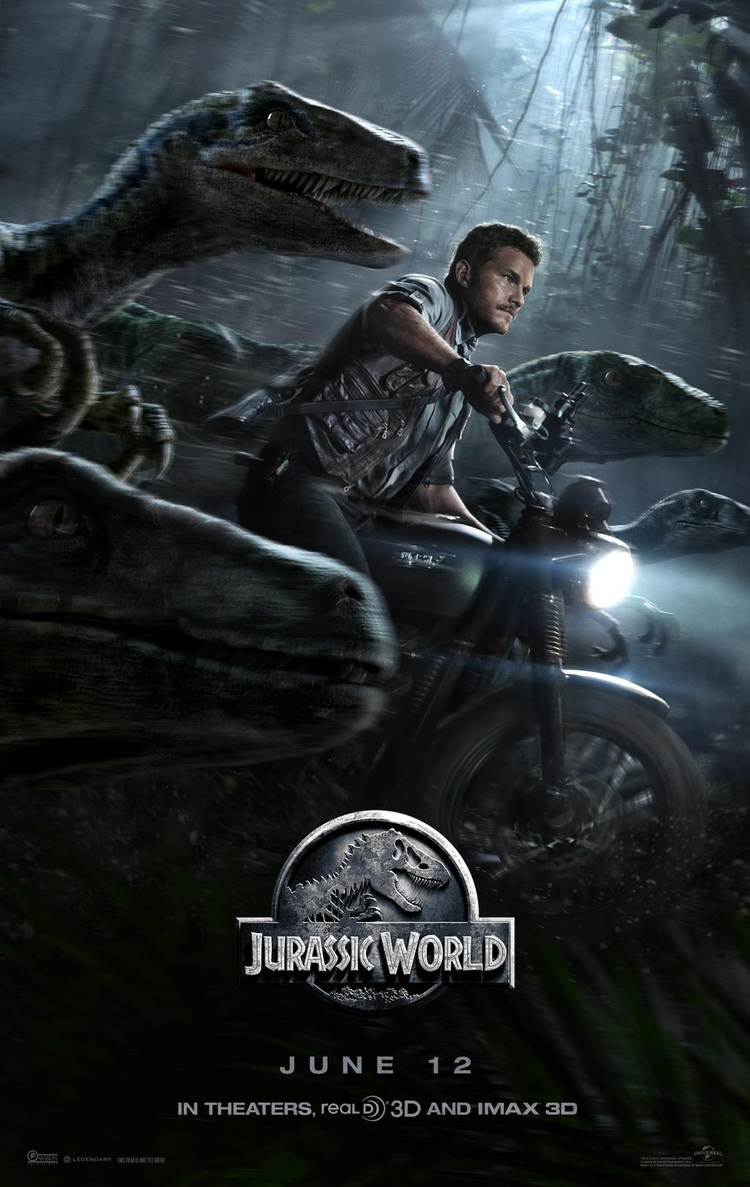 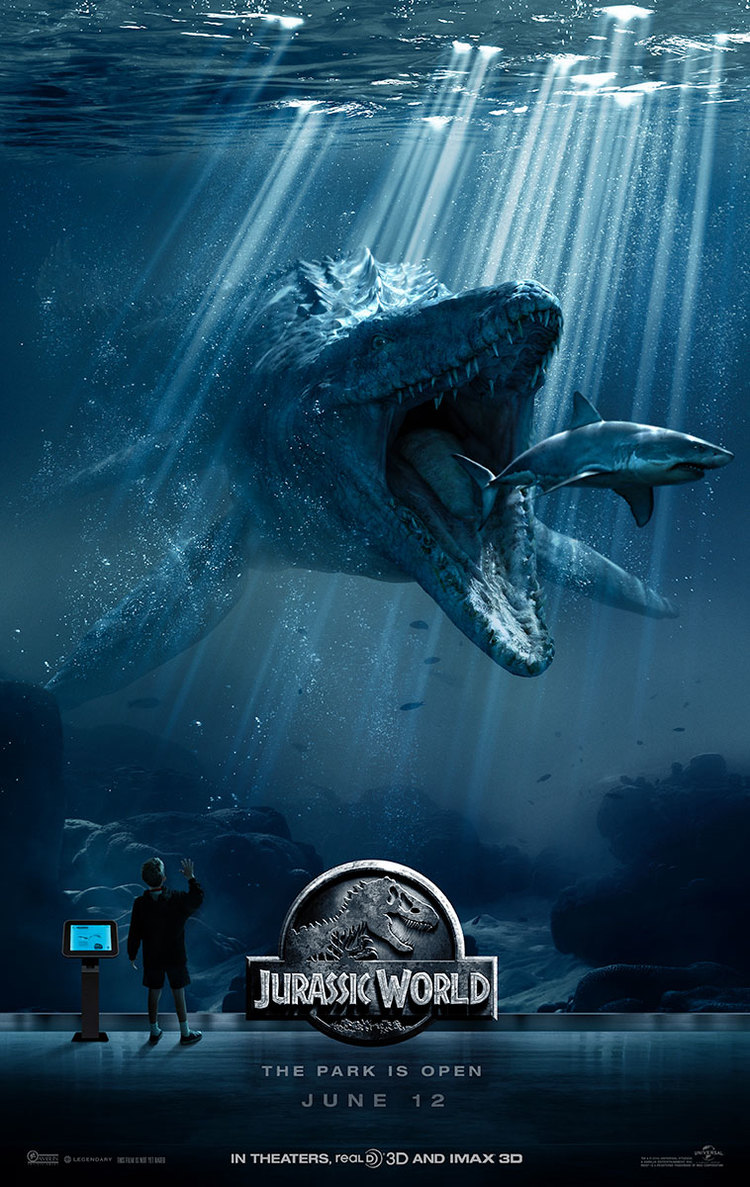 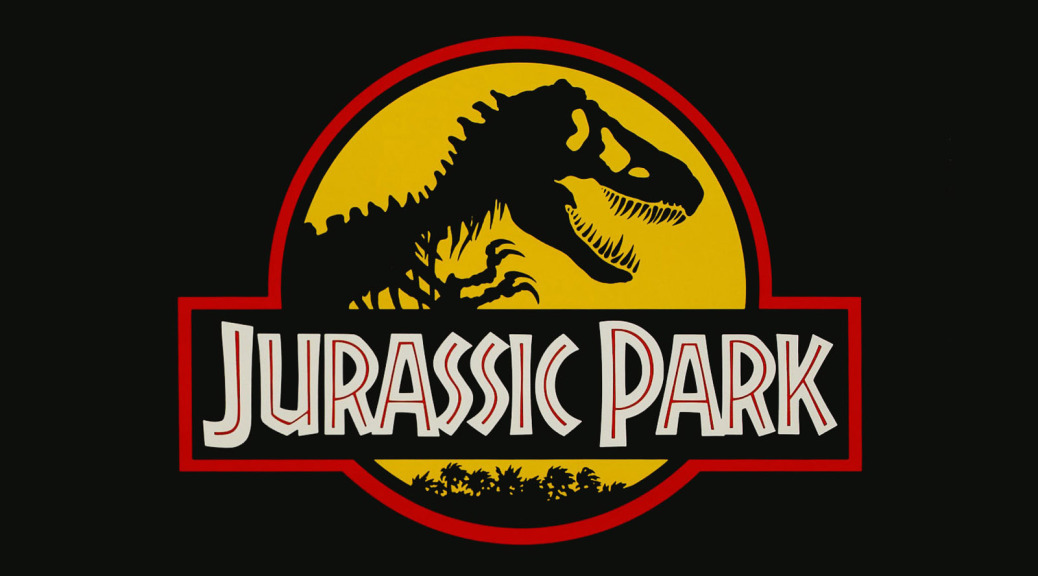 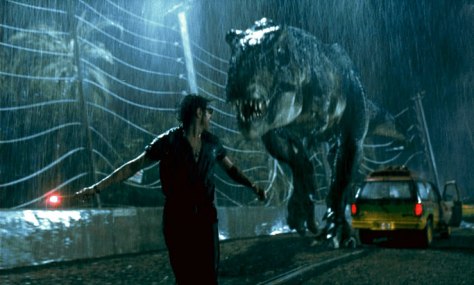 How can it have possibly been 20 years since Jurassic Park was released?  I can remember the first time I saw the teaser poster with the black and red Jurassic Park logo and the “65 million years in the making” and just the anticipation leading up to its release.  They were so good in hyping it without showing you hardly anything at all.  I can’t remember before or since a non-franchise (at that time) film having that kind of buzz about it before it opened.  Plus, every boy goes through a dinosaur phase at some point and I was no exception.

Jurassic Park was the first PG-13 movie I was allowed to go see in the theater.  My parents were…let’s just say strict about moviegoing and I was only able to go because it was my best friend’s birthday and his dad did some voodoo on my parents to get me permission.  I, for the record, was perfectly fine throughout the movie.  My friend ran screaming from the theater when the Dilo eats Nedry.  Oh yes, I remember.  YOU RAN, DUDE!

Revisiting it 20 years later, it really is a movie that demands the big screen.  I’ve seen it a hundred times, but in the theater it really is just a whole different level of spectacle.  The 3D is well-done.  It’s not intrusive.  The F/X still look fantastic.  In fact, I’ve watched the other two (shudder) since and I think the dinosaurs look better in the first film still than in any since.  The wonderful reveal as the jeeps pull to a stop on the hillside and you see the slow dawning dumbfounded expression cross the characters’ faces and then the pan up to the Brachiasaur.  Still gives me chills


Steven Spielberg had in 1993 possibly the best year a director has ever had.  He released this and Schindler’s List in one year.  There’s no way he could make this movie now.  Somewhere along the way he lost the ability to craft adventure pieces and tightly pace his films, but this was right at his peak.  This stands beside Raiders of the Lost Ark for me as perfect adventure moviegoing fun.  It’s a classic.  It changed moviemaking forever and 20 years later, it’s still as good as the day it was released.  Go see it and take your kids like so many adults in my theater did so they can be permanently scarred by the T-Rex attack.  Or maybe they’ll break at the Dilo like a certain KT reader who’s swearing at me right now…
10/10