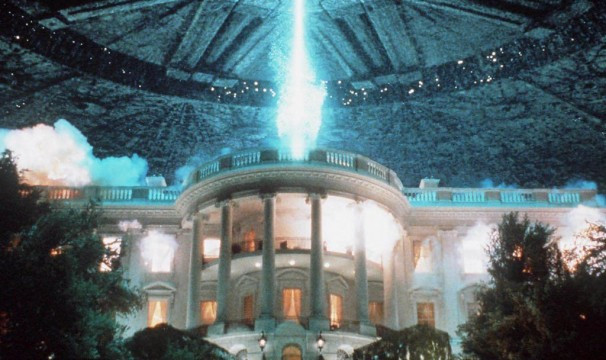 This will undoubtedly win the award for Shortest Favorite Scene Ever.  I know there’s drama around it, what with the running and the helicoptering and Jeff Goldblum staring at his laptop, but this is probably the best explosion in movie history that doesn’t involve a Death Star.  I remember in summer 1995, my best friend and I went to see Apollo 13 and they played the teaser trailer for ID4 and it was pretty much just this.  That’s how you do a teaser trailer.  We’re going to blow up the White House.  Wanna come see?  BOOM.  ID4 coming Summer 1996.


This was before Roland Emmerich went on to make a career out of blowing up any landmark of significance worldwide.  If there’s something left he hasn’t blown up, it’s not significant.  It’s like the cool kids table for monuments.  Has Emmerich blown you up?  Pssht, go sit with the national parks.

There is a sequel to Independence Day coming in 2015 (the year of all movies ever being released).  There’s no Will Smith, but Jeff Goldblum and Bill Pullman are on-board, so we definitely still have the star power necessary to repel another attack.  I’m guessing it took 20 years, but the alien race noticed that all those frisbee ships they sent Earthward never checked back in, so they’re back.  If there’s a shot of a carpenter satisfyingly hammering in the last nail into the reconstructed White House right before they reduce it to splinters again, I will have a new favorite movie explosion.


Also, depending on the inhabitant of the real White House, I sometimes find this cathartic to bring up and watch several times alongside the news.  My dad does the same thing with Die Hard after a bad day at work.  It’s how we could all tell it was a bad one.  “Dad’s going for Die Hard,” stay out of his way.  Thank you, movies, for helping us “cope”.