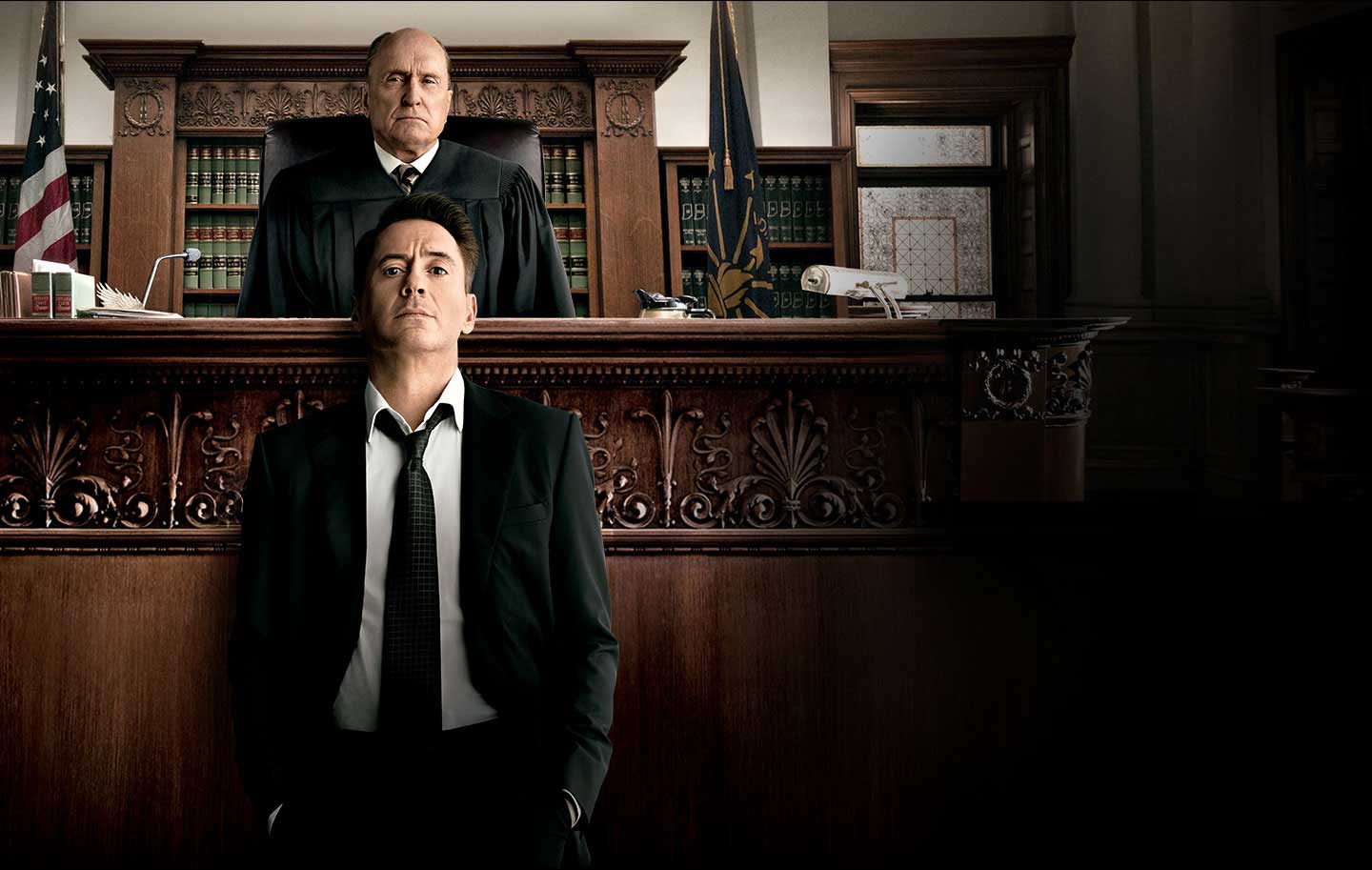 The Judge was touted as an Oscar lock given the talent on board with Downey, Duval, Farmiga, Thornton and D’Onofrio, but received lukewarm critical reception.  I was really curious about that, because if you stick two of the greatest actors working today and have them hammering at each other in the courtroom…..how can that not be good?  It turns out it is.

Let’s get the problems out of the way first, because it is the beginning of the film, from its crass and puerile opening (This was directed by The Wedding Crashers’ David Dobkin, so perhaps he didn’t know how to open.  The first half-hour is slow.  Not unwatchable.  Just slow.  Once this becomes a legal thriller, though, the movie picks up pace dramatically and we finally get what we wanted: Duval vs. Downey.

Robert Downey Jr’s character is the lawyer guilty people pay to beat the system.  He’s rich, he has a huge house, a crumbling marriage and a daughter he adores.  While Hank (Downey) doesn’t seem dissatisfied with life, the only times you see him smile in his previous life are when he’s with his daughter.  He’s from Carlinville, IN, and he hasn’t been back in 20 years,  That is, until he receives a voicemail, informing him that his mother has passed away and Hank reluctantly returns to his two brothers and his crotchety father, who has served as a Judge in Carlinville for 42 years

The reason for the estrangement between Hank and his father slowly unravels during the course of events that keep Hank in Carlinville just as he was about to leave.  The day his wife died, the judge hit someone with his car.  That someone was a felon he’d given leniency to, and who subsequently murdered a 16-year-old girl.  The felon’s blood is on the car.  There’s tape of him speeding after the felon’s car.  The case looks dim, and the state has sent a special prosecutor (Billy Bob Thornton) to ensure a conviction.

This is where the movie becomes absolutely fantastic.  It’s just it takes us 40 or so minutes to get there.  This film does not need to be 2 hours 24 min. long.  That’s poor direction, but the script is good and Duval and Downey are fantastic.  I’m not spoiling the twists and turns of the case, but trust me, in both the legal case and in the father/son relationship, but they surprised me.

I primarily rented The Judge to see Duval’s Oscar-nominated performance, and he’s brilliant and I’ve loved him since I first saw Lonesome Dove as a kid.  The tropes in this film: the father/son estrangement, the returning home after leaving for a long time and the legal thriller, are not uncommon.  But done with some of the best actors around, you realize why those themes get re-used over and again.


I seriously recommend giving The Judge a try for a rental.  I don’t think you’ll be disappointed.
7.5/10

*Note: from this review forward, I will include the trailer for the film in the review so that if you’ve never heard of it or want a preview, you just have to push play.