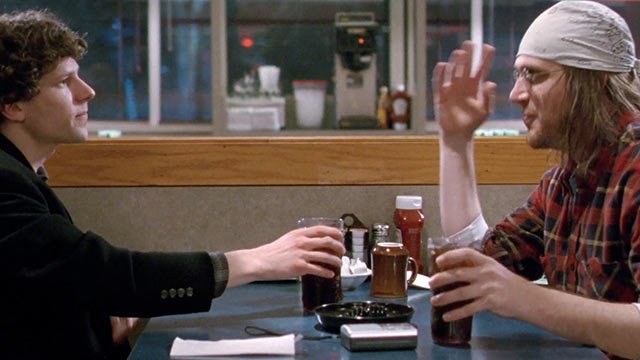 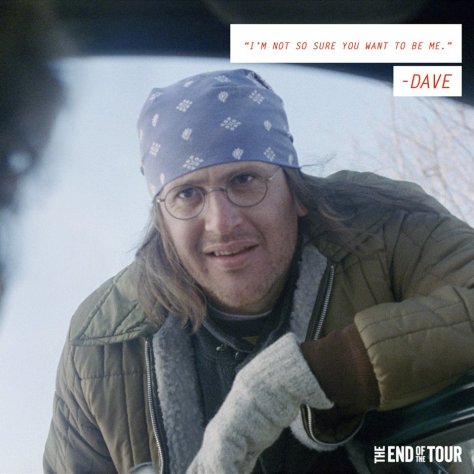 In 1996, David Foster Wallace burst onto the literary scene with his magnum opus: Infinite Jest.  The End of the Tour is not a biopic.  It is, as the director calls it, an anti-biopic.  It tells the story of five days that Rolling Stone writer David Lipsky (Jesse Eisenberg) spent with Wallace (Jason Segal) at the end of the book tour for Infinite Jest, interviewing him for the first article on a writer that Rolling Stone had ever published.  The film opens in 2008 with Lipsky getting the news of Wallace’s suicide.  He then breaks out the tapes from his interviews with Wallace and we, through them, spend those five days getting to know two writers getting to know each other.  It’s absolutely brilliant, and should immediately jump to the top of your rental queue, especially for literary nerds and writers (of which I’m kind of both).

If you’ve never read Infinite Jest, you don’t actually need to, but the movie will probably make you want to attempt it.  Let me warn you that it is the densest book I’v ever read, it weighs 3.5 lbs. in hardcover, comes in at 1076 pages and I have not even mentioned the footnotes.  Giving you a summary would take more words than I typically devote to nine reviews, but essentially it takes place in a future where all of humanity is sponsored by corporations down to the micro level and is so absorbed by media that they’ve forgotten how to live real and meaningful lives (you’ll pause for a moment and freak out, then Google something to make you feel better).  When Infinite Jest hit literary critics, it was like something had descended from above complete with choral music.  It also made every other writer want to see what made this guy do what they’d been trying so hard to do.  It made David Foster Wallace uncomfortable, validated and scared to death.

David Lipsky, whose work I’ve also read and whose memoir of these five days is the basis for the screenplay, initially dismisses Wallace.  Then he reads Infinite Jest and talks Rolling Stone into doing an article on him really just so he can find out what is going on in this guy’s head.  What he finds is a pudgy, bandana-wearing, junk food lover who is so addicted to television that he won’t have one in his house because he’s afraid that he’ll sit down and never get back up.  He’s also incredibly insightful, incredibly self-aware and just brilliant enough to know that his “brilliance” is going to be a gigantic problem for him.  The David Foster Wallace Jason Segal plays, if you’ve ever wondered what I’m like, is about 70% of what I’m like.  I own a TV and have not published a literary masterpiece…..that’s like 20% of the difference.

The director made a choice to not let Eisenberg or really meet until filming was about to begin (and the whole thing was made in 25 days), but it was a fantastic choice.  The majority of the film are discussions between Wallace and Lipsky as they’re getting to know each other through this interview, just as the actors are feeling each other out as performers.  I throw my hands up over Best Actor this year, because first I said Michael Fassbender had to have it, then Ian McKellan and now – I swear to you – Jason Segal deserves serious consideration.  His work is so far removed from the comedies and sitcoms he’s done his whole life that this is a completely different person.  He’s absolutely brilliant.  I felt like this “antibiopic” gave me a better idea of who Wallace was and a profound sense of loss because so many of the things he would talk about and worry about are things that bother me as well.  2015 has given us another gem, and it’s beginning to freak me out how good this fall has been, overall, at the movies.
9.75/10

One thought on “Movie Review: The End of the Tour (2015) *Brilliant Writing for a Brilliant Writer’s Tribute*”