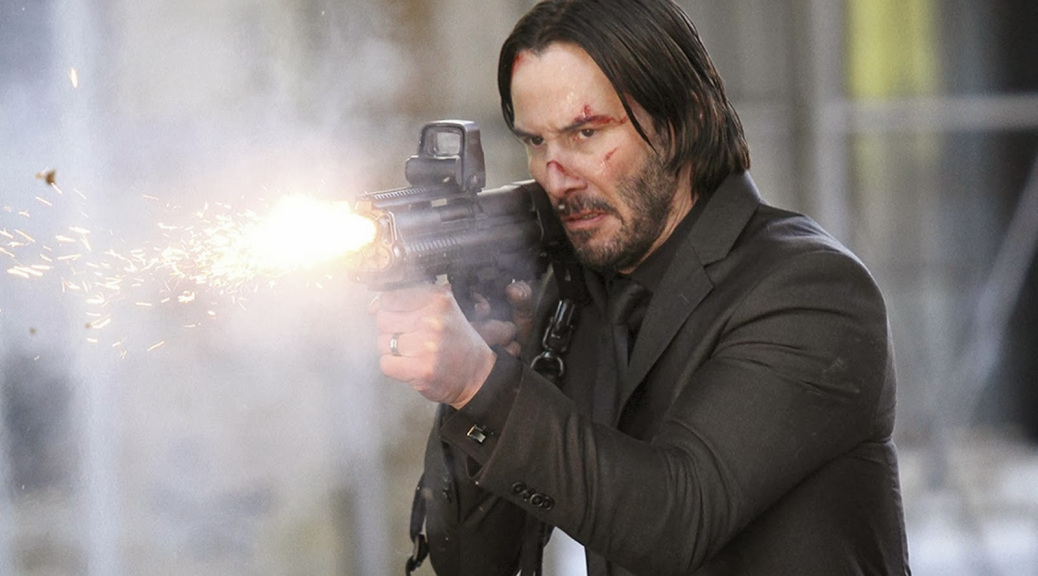 One faces a dilemma in reviewing movies like John Wick ( and there are so many movies like John Wick that you could spend the rest of your remaining earthly days scrolling through Netflix’s Action/Adventure suggestion queue and never watch half).  There’s the argument that every film deserves to be examined for artistic merit and even rancid pieces of boar offal like John Wick which critics are, for some inexplicable reason, lauding; thus warning the general public away – a sort of bio-hazard sticker for the Blu ray case.  On the other hand, there’s the argument that the more attention we pay to films this bad may encourage “film makers” to make more.  Sort of like why they don’t show fans who run on to the field at professional sporting events on the televised broadcast.
I just spent 150 words arguing with myself over the issue and it took me 45 minutes because I kept spacing out and nodding off thinking about this horrifyingly bad film and trying to find something to say about it.  I’m leaning toward a simple “Mr. Yuck” style sticker for the Blu ray.  How this film has a 7.9 rating on IMDB leads me to believe that  2014 has movie critics so bored and angry that they’re just screwing with people at this point.

Ok, let’s just get this out-of-the-way.  John Wick (Reeves) wife has just died of a long disease (so it’s cheering me up to no end) when at his door arrives a puppy that John’s wife ordered before her death as a present to help him cope.  John also has a car he likes.  John is gassing up his ride with his new-found pooch riding shot gun when a group of guys who should have been wearing baseball caps that said “HI I’M A RUSSIAN MOBSTER!” come over and try to buy John’s ride.  Ride’s not for sale replies John.  Things get a little heated but everyone moves on…..until that night when they come to his house, beat him like a pinata and (wait for it) kill his puppy.  They also steal his car


This sends the entire criminal underworld into a manly tizzy because John Wick was, until he killed a stack of people you could see from space to “get out”, the Russian mafia’s go-to person for going to people and making them no longer persons.  The rest of the movie is like a smoothie of action movie clichés from any and every movie you can think of in the last thirty years.  The Russian mob sends men at John; John leaves behind a trail of human debris so thick that they had to create a character just to explain how they were all being cleaned up.

I hate to say nothing good about a movie, so I will say I thought the Hotel Continental, a members-only hotel where  assassins stayed during jobs in an oasis of understood peace was a fun idea.  The only enjoyment I took from the film were the hotel staff’s interactions with its guests.


It ends with more shooting and more bodies until there are no more bodies left but John, who then selects a new puppy and walks off into the night.  Oh….spoiler.

This movie was noise.  It was a lazy exercise in stupid and senseless plot and violence that couldn’t have been good with a real actor in it.  Keanu Reeves is not a real actor.  He cannot act.


Don’t get me wrong.  I’m a dog guy.  I have two dogs and I love them.  If someone killed my dog, I would rain hellfire down on their heads and salt the earth.  But I’d do it with some damn charisma.