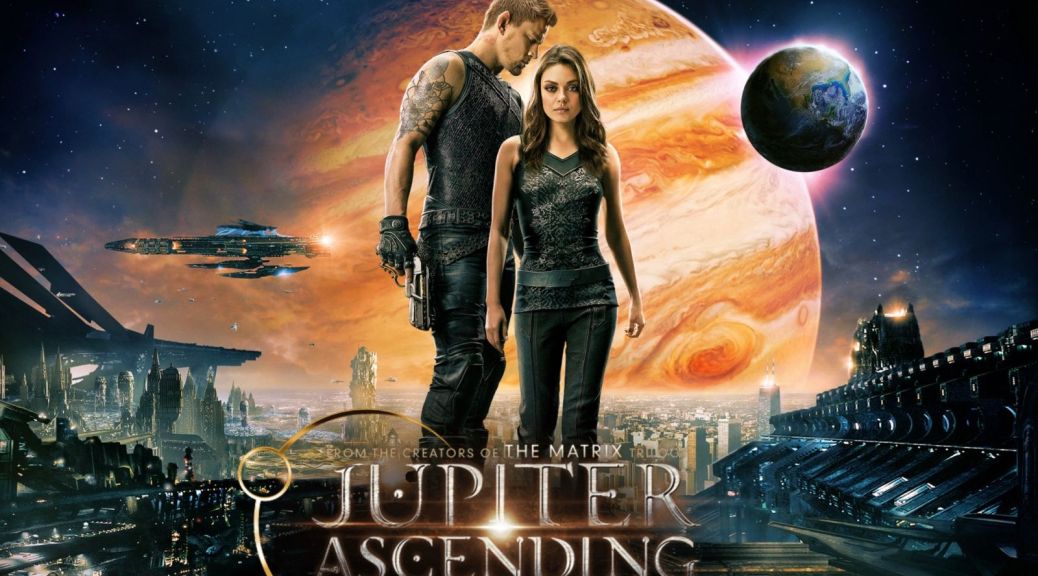 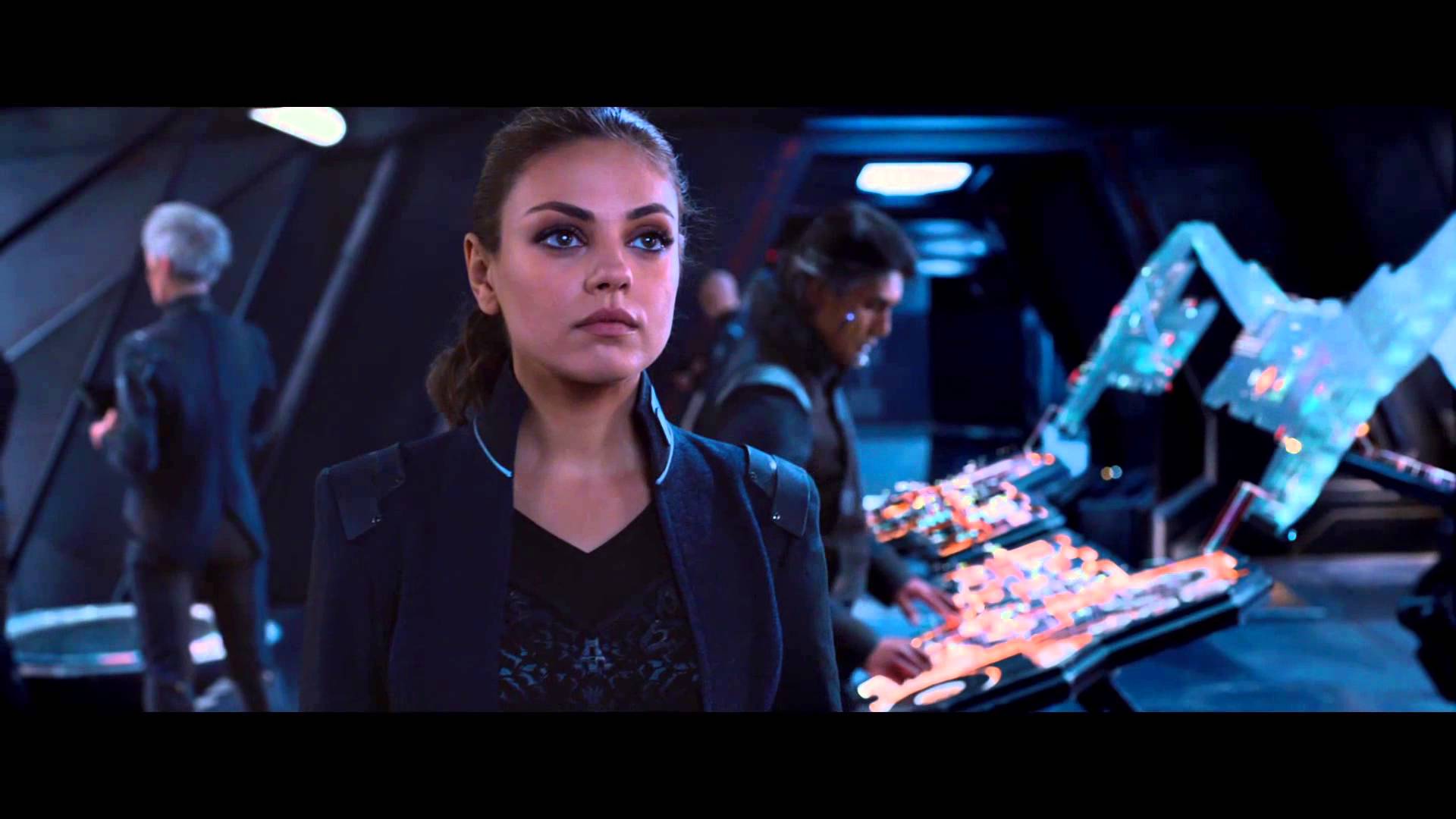 Jupiter Ascending is an extremely cool movie layered on top of a bad one. I have never been so entertained by a movie this flawed. I don’t mean I enjoyed its awfulness, like Plan 9 From Outer Space. I mean I actually found it enjoyable.The question is, do you want to shell out money to see it, particularly in IMAX 3D?

A lot of critics have expressed confusion over Jupiter Ascending’s plot, but I found it to be straightforward. In short: the ruling class of an intergalactic empire seeds planets with life, allowing human beings to evolve and advance towards a state of
Darwinian perfection. Eventually those humans are slaughtered and processed into an elixir that grants longevity to the universe’s rich and powerful, who travel in circles where time is the ultimate commodity.
Earth is one such seeded world. Even more unsettling, the members of the space empire are humans, too. All that separates us from them is that they have more knowledge and better technology.
Jupiter Jones is a cleaning woman on Earth who discovers that she is an example of something called “recurrence.” This means that, by coincidence, she has the same genes as someone who has lived before: in this case, the royal owner of the Planet Earth. And because of a cosmic loophole, Earth now belongs to Jupiter Jones, which does not sit well with the noblewoman’s heirs in outer space.

With a target on her back, Jupiter is rescued and protected by Caine, a genetically modified mercenary. He whisks her into outer space, where she gets caught between heirs as they attempt to screw her out of what is rightfully hers.
What is right about Jupiter Ascending? For one thing, the baroque production design is unique, a near-masterpiece of world building. The action sequences, including a chase through the skies of Chicago, are eye-poppingly awesome. But the most impressive set piece is a humorous depiction of the galaxy’s impenetrable bureaucracy, filled with nods to Terry Gilliam’s Brazil, including a cameo by Gilliam.  But while Jupiter Ascending is reminiscent of many things (the overall concept seems especially close to Frank Herbert’s Dune), the ideas feel fresh, at least when it comes to cinema.
So what is wrong about the movie?
Only the foundation.
The script is cringeworthy. It’s worse than the romantic dialogue in Attack of the Clones.  The dialogue in Attack of the Clones was delivered by highly gifted actors who were lost at sea. But while they can be appealing in the right context, the actors in Jupiter Ascending are no Natalie Portman or Ewan McGregor.
Mila Kunis was not meant to be a sci-fi leading lady. Her performance, and her character as written, would have been perfectly acceptable in a rom-com, but I did not believe for a moment that she was a person from Earth who had suddenly been thrust into a dangerous game of intergalactic intrigue.
But Kunis is excellent when compared to Channing Tatum as Caine. Those antigravity boots he wears ought to be iconic, but he gives the most wooden performance I have ever seen outside of a B-movie. To be fair, he was given virtually nothing to work with. His character has no personality, no distinguishing traits at all, except for the fact that his genes are spliced with a wolf’s, and he is good at picking up scents.

It must be said that Eddie Redmayne, as the evilest of the royal heirs, exists in a place where creepiness and camp are inseparable. He is so languid it’s over the top, and he is a rare standout in the cast. Otherwise, the giant lizards who serve the nobility make the biggest impression of any of the characters. And while they are impressive, they are special effects.
There is something else, something off about this movie that I can’t quite put my finger on, but seems to exist in every frame. My guess is that the rumors are true: at the last-minute the film was heavily re-edited to change the focus. It also feels like it was edited for time, that we are not getting the full picture originally intended by the Wachowskis.
The sheer scope and ambition of Cloud Atlas helped to overcome its weird flaws, but Jupiter Ascending is a science fiction/action movie. When a movie’s problems are this fundamental, incredible action and CGI are enough to distract, but not transcend.

Ultimately, I am glad I saw Jupiter Ascending. It’s an amazing spectacle that demands to be seen in IMAX 3D. At the end of the day it all comes down to how demanding you are as a filmgoer. Some people want to be challenged every time they walk into a theater. They want every film to be (gasp) well-acted. They require a fully rounded film every time. Me? While I love the strange, dark, cerebral stuff, sometimes I just want to witness some cool action. If a movie gets too weighed down I just close my eyes and picture scenes from The Matrix.
When Could Atlas bombed, I was heartbroken that more people wouldn’t get the chance to see what I thought was one of the most wonderful, groundbreaking films to be released in my lifetime. But when Jupiter Ascending bombs (and it will) I won’t shed any tears. I won’t be telling anyone to rush out and see it. I’ve loved all the Wachowskis’ previous films.  Sooner or later they’re going to lose their Hollywood privileges, and deprive us of their imagination altogether.
5.0/10