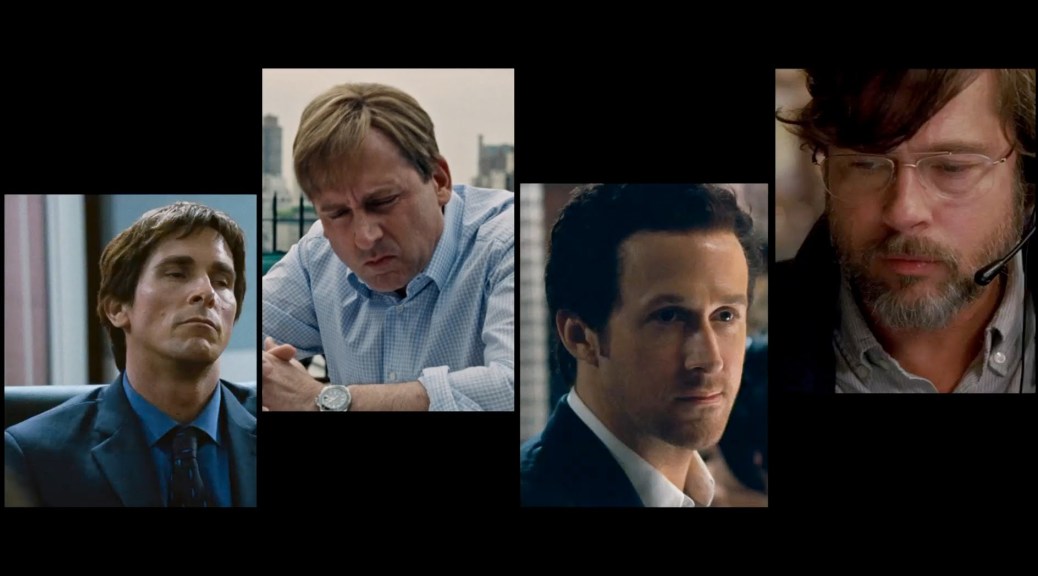 I am not a stupid person (I have test scores that back this up, which I would prefer you look at rather than at me in action in actual life); however, I have I giant blind spot in my intellect when it comes to anything financial.  My eyes glaze over and my brain simply will not wrap itself around what makes things tick when it comes to economics.  It’s unfortunate that I’m in the majority when it comes to this, because it is, in large part, what lead to the crash of the housing market, which – in turn – crashed the world’s economy.  Trillions were lost.  Millions (including me) lost their jobs.  The Big Short is the story of a few separate investors who saw what no one else was willing or able to see and how they made a ton of money betting on a global economic collapse.

Director Adam McKay, who is most famous for his comedies like Anchorman, infuses what is ultimately a very depressing story (remember, we all lived through it?) with a lot of humor.  McKay previously tried broaching this topic in his comedy The Other Guys, and it was out of place.  In adapting Michael Lewis’ best-selling account of the collapse, McKay has a much more solid platform from which to examine what happened and an all-star cast to back it up.  Steve Carell, Brad Pitt, Ryan Gosling, Marissa Tomei, Christian Bale and others put on an actors showcase with an extremely strong ensemble effort.

There are two problems with The Big Short, and one of them is simply that the subject matter being explained is DENSE, but you need to understand it in order to comprehend exactly what these traders did in betting that the American housing market would fail once they discovered what no one else was willing to see.  To do this, McKay is willing to do literally anything to capture the attention of viewers long enough to get his point across.  He puts definitions up on the screen, he breaks the fourth wall using Ryan Gosling’s character as a narrator for the piece, and when he gets to making really key points (such as explaining just what a sub-prime mortgage is) he’s willing to cut to Margot Robbie in a bubble bath sipping champagne and have her explain it to us.  If nothing else, McKay scores a lot of points for unique content delivery.

The other main problem with The Big Short is that it doesn’t have a driving, central narrative thread.  These traders didn’t (mostly) interact and he’s essentially telling four separate stories woven around the core of the market’s collapse.  He does this about as well as it can be done, but some of the editing and directing choices are a little grating.  It’s a twitchy, frenetic film and it can feel a little grating at times.

The good news is that his ensemble knocks these unique characters out of the park.  Steve Carell is probably the biggest standout with the largest role, but Gosling and Bale are also great in their threads.  Brad Pitt doesn’t enter the film until about an hour has passed, and his role is very small, but he absolutely nails it.  It’s a pleasure to see Pitt get better and better as he ages, and he has the best monologue in the film: a grounding bit directed at the other traders that what they’re actually doing is betting that America’s economy will collapse, millions of people will be unemployed and homeless and that some of them will die.  It’s a sobering reminder that comes at a key point in the film.  This is an important film to see because most people are under the impression that the things that lead to the housing market’s collapse were fixed.  They weren’t.  This, sadly, is more than likely to happen again.  Maybe enough will feel dumbstruck and angered by the idiocy and greed in this film to shake off their apathy and prevent us all from having to go through it once more.

One thought on “Movie Review: The Big Short (2015) *Making Money on a Meltdown*”