While we were down with power issues, Trekkies and movie fans in general mourned the loss of Anton Yelchin, who passed away in a horribly tragic accident over the weekend.  Yelchin, who played Chekov in the revived Star Trek cast that began in 2011, was just weeks away from seeing his crew take to space for the third time in Star Trek: Beyond.  What happened to him is so senseless, but I think we all have had people in our lives disappear because of random accidents.  It’s just a reminder that we’re not promised any certain amount of time, and to make what we have count.  From the testimonies of his friends, it seems like Yelchin (only 27 at his passing) was a good soul and I’m so sorry that we won’t continue to see his talent continue to develop. 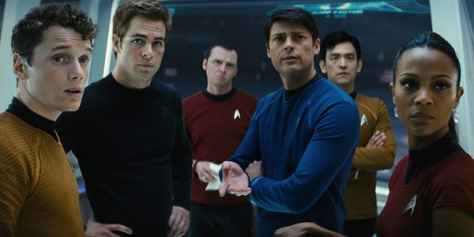 Star Trek: Into Darkness made a lot of missteps, especially in recycling the plot of Star Trek II: The Wrath of Khan.  Director JJ Abrams has admitted that things didn’t exactly turn out as he’d hoped.  The film certainly isn’t bad, and if you hadn’t seen Star Trek II and know this precise story had already been done and been done so well that retreading those steps (sometimes line-for-line) was a poor choice.  Especially given the talent  of the recast crew, not allowing them to have their own adventures, keeping the training wheels on them for a second film, so to speak, was unwise.  Essentially the second film ends in the precise place the first one left the crew, so it ultimately feels like a wasted opportunity.


That the back half of the film went off course, is unfortunate because ST:ID has one of the best openings of any film I’ve ever seen.  The first nine-minute sequence is everything that’s good about Star Trek compressed into a single escapade.  The crew of the Enterprise, breaks The Prime Directive (Star Trek’s most sacred law) to stop a civilization from being wiped out by a volcano.  It’s got aliens, amazing use of color, kinetic action, fantastic use of the Enterprise, and just showcases everything 2011’s Star Trek introduced so you feel like you’ve jumped right back into this ongoing adventure.  Though the whole is flawed, in parts, Star Trek: Into Darkness was outstanding and no more so than in its introduction.

3 thoughts on “My Favorite Scene: Star Trek Into Darkness (2013) “Breaking the Prime Directive””