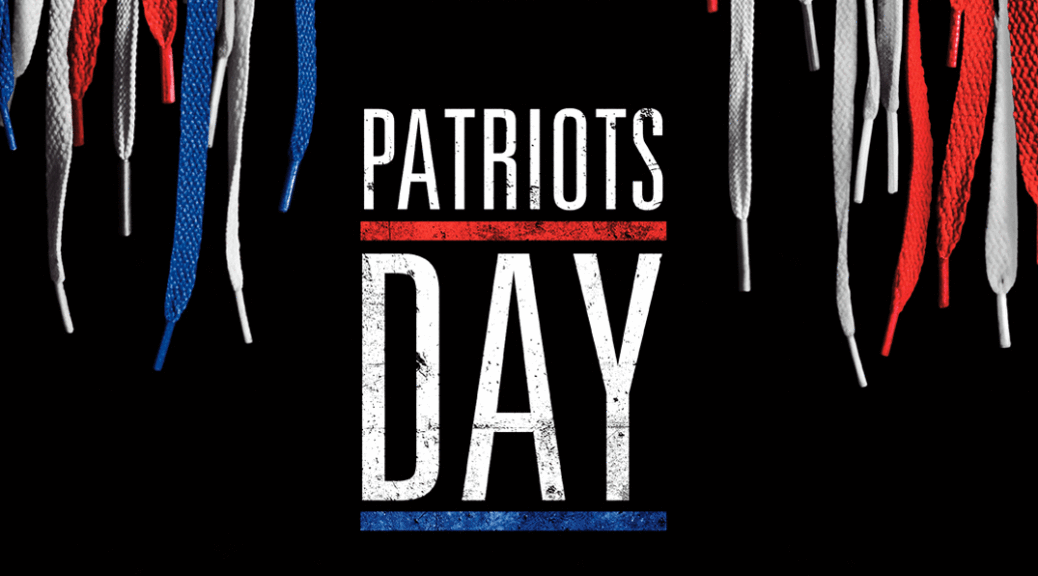 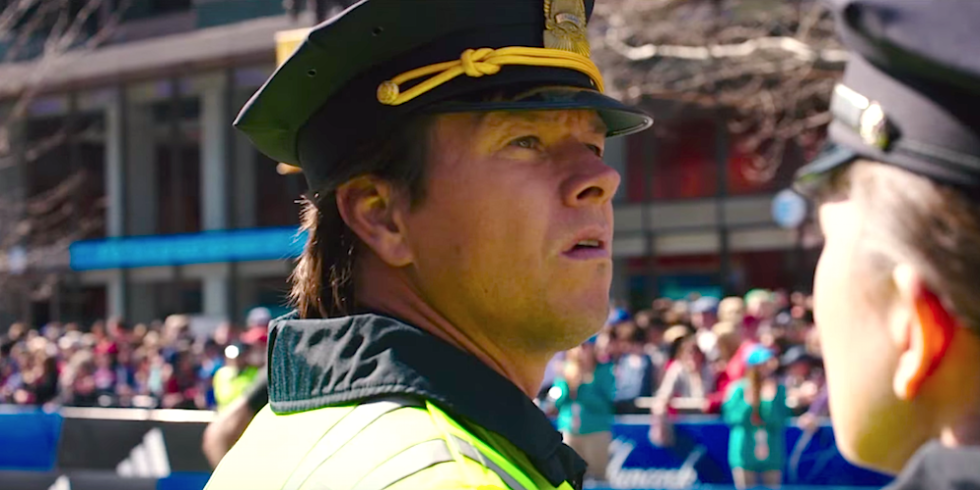 The Boston Marathon bombings are still a fresh wound for the country, even more so in Boston, so a movie about them so quickly at first glance seems too soon.  However, enter Peter Berg and Mark Wahlberg who are on a roll turning horrific tragedies and current events issues which normally spiral off into larger debates (The War in Afghanistan, environmental impact, terrorism) into focused stories on the heroism of  the day.  Some people go their whole lives without having a day.  But if you’ve had one, you know that the rest of your life is viewed in light of what happened before that day and what came after.  It’s for the people who had these days that Berg is making these films.  Deepwater Horizon (which only came out months ago) reminded us that it wasn’t just a horrid environmental disaster; it cost 11 people their lives.  Patriots Day‘s scope is larger than Deepwater’s by a factor of ten. It’s Berg’s best film yet, Mark Wahlberg’s best performance of his career, features an outstanding cast of some of the best character actors working, and the end result is a memorial to a city that stood strong during a day that will forever be etched into its psyche.

Patriots Day marks the third collaboration between Peter Berg and Mark Wahlberg (Lone Survivor, Deepwater Horizon) in as many years.  That this and Deepwater were released so closely together is in some ways a shame because each deserved recognition, and while Deepwater pulled down some Oscar nominations for its astounding sound design and effects, Patriots Day was shut out.  Berg takes a no-nonsense approach to recreating these incidents; he tries to get as many of the real people involved as possible; he doesn’t have lines coming out of people that aren’t authentic to the time and place.  The movies have minimalist score and focus more on immersive sound and the tension created by the film to pull you into the event.  It’s not stylized, it’s not glamorous, it’s as close to a recreation as they can get while still staying on the side of a film rather than a documentary. If you’ve watched interviews with him or him on the set, he has zero tolerance for bs.  The gore and violence post-explosion are kept to the necessary degree to hammer home the horror of the event without reveling in the carnage.  The recreation of the Battle of Watertown is shockingly violent.  In an event that TV largely covered live, this was a part we didn’t see and the pitched battle in this quiet, suburban neighborhood between the bombers and an increasing number of responding police officers is as intense and out of control as the claustrophobic battles in Black Hawk Down. But it happened, and Berg walks the fine line of recreating the violence without descending into glamorizing or reveling in it.

Deepwater was very contained. Once everyone was established and on the rig, it was almost a haunted house of explosions, creaks, groans, rivets popping, valves rupturing, all of it making it a very claustrophobic film at times.  Patriots Day covers several days over the entire city of Boston sprawling out into the final battle in Watertown, and unlike the Deepwater Horizon incident, America watched the initial explosion, the aftermath, and the manhunt leading to the boat in a backyard over 100 hours of nearly non-stop news coverage.  Also, as I mentioned in the opening, this is also rawer wound; it’s been only a few, scant years and Boston is still very much in healing mode.  Berg got some pushback when he tried to get permits to film at some of the actual locations.

My only criticism of Patriots Day is that it feels like it takes a hair too long to get going, but there are so many moving parts  that I don’t even know if that’s a valid beef, but once the bombings occur, there isn’t a person moving in the theater until after the credits roll (again utilizing what he did in Deepwater, Berg brings in the real people chronicled in the film. You see they’re real people, you see the physical price some of them paid that day and it’s just another way Berg denudes these films of Hollywoodish glamour and makes them more cinematic monuments.

You could not ask for a better group of veteran actors to drive this narrative.  JK Simmons, John Goodman, Kevin Bacon, Khandi Alexander, Michelle Monaghan, and so many others give outstanding performances.  What floored me though was how good Mark Wahlberg was in this film.  I’m not a Wahlberg hater; I find him a likable guy, but I’ve alwas felt his brother, Donnie (Band of Brothers, The Sixth Sense) was the Wahlberg who should have been pushed into leading man status.  In this film, Wahlberg raises his game.  He clearly works very well with Berg, and as the audience’s point of view man on the ground, he lays down the best performance of his career.  There’s a scene toward the end of the film that just absolutely floored me.  He gives this little solliloquy in response to being asked if he thinks we can beat this (terrorism).  I wish I could find the whole thing, and this is only the back half, but this scene should have landed hin a Best Actor nomination.


Patriots Day has several narrative threads other than Wahlberg’s.  You follow several different players who end up being key in the final manhunt, including that of the bombers.  It would have been easy to demonize them or make them extra sinister, but what’s more disturbing is how casual they are about it.  There’s a scene of them watching the coverage, and one of them just remarks that they should have left the backpacks at waist height so they would have gotten more casualties.  Somehow that’s more infuriating than the anti-American rhetoric that they inundate the man they carjacked with later in the film.

The two most difficult scenes to film were obviously the bombing itself and the Battle of Watertown.  The bombing is chaos, lots of cuts, disorienting and horrifying.  You almost get a better feel for what happened alongside the FBI-lead task force as they recreate the scene in their command center, because in the immediate aftermath it was utter madness.  The Battle of Watertown, by comparison, blew me away by how few cuts are in the scene.  It’s a pitched battle that lasts over 10 minutes onscreen and it nearly feels like they did it in one take.  You didn’t get to see that in the TV coverage, but the scenes we all remember are there. The entire city of Boston shut down and how eery it is to see it empty, the cooperation of the whole city, culminating in what, to me when I was watching the coverage, was the most phenomenal visual: that of every city street the emergency response vehicles traveled down on their way back from Watertown being thronged with people cheering the police and coming together in a way (albeit confined to one city) that I don’t think I’ve seen since 9/11.

Berg needs to keep making films in this vein because it’s important that these stories get a monument; something that is accurate, immersive, and a testament to those who lost life and limb in horrifying circumstances and to those who ran toward danger to aid them.  The simple fact is that someone is going to try to eventually make a definitive 9/11 film.  Paul Greengrass covered United 93 in a very similar way to these Berg films so that has its monument, but the few botched attempts so far don’t touch what that was to this country and the world.  Berg isn’t politicizing these films; he’s interested in the survival story; the human angle.  What 9/11’s legacy will eventually be is something that I don’t think we’ll know for generations.  But when someone makes the film about that darkest day, I want it to be Berg.  It would be the ultimate test of this type of film making, but they’re getting larger in scope with each one and I can’t think of anyone else making a definitive cinematic memorial to that day.  It may not be for a good while, but Berg’s the man to do it.

I was so moved by so many details in this film, the trooper who stood watch over the body of the eight-year-old boy killed in the blast,  The unbelievable courage of the hostage the bombers carjacked which really lead police to Watertown and the beginning of the end. David Ortiz participating to meld with the actual footage of the most beloved Red Sox of this generation saluting the men and women who participated in the event.  So many powerful moments that come together to make a powerful tribute to the people and city of Boston.

I don’t know about you, but I’m so tired of feeling like I’m either biting my tongue or finding myself in daily pointless arguments over politics where volume seems to have replaced civil debate as a way to understand each other.  The Deepwater Horizon disaster most directly affected the reddest of red states, and blue states don’t get much bluer than the Commonwealth of Massachusetts.  But when faced with disaster, the reactions are the same.  Maybe in how we react in crises as Americans, we can somehow trace back a path toward broad solidarity despite our differences.  It’s my hope, and hope is what these films Berg has been making are ultimately all about.  Patriots Day is another 2016 gem.