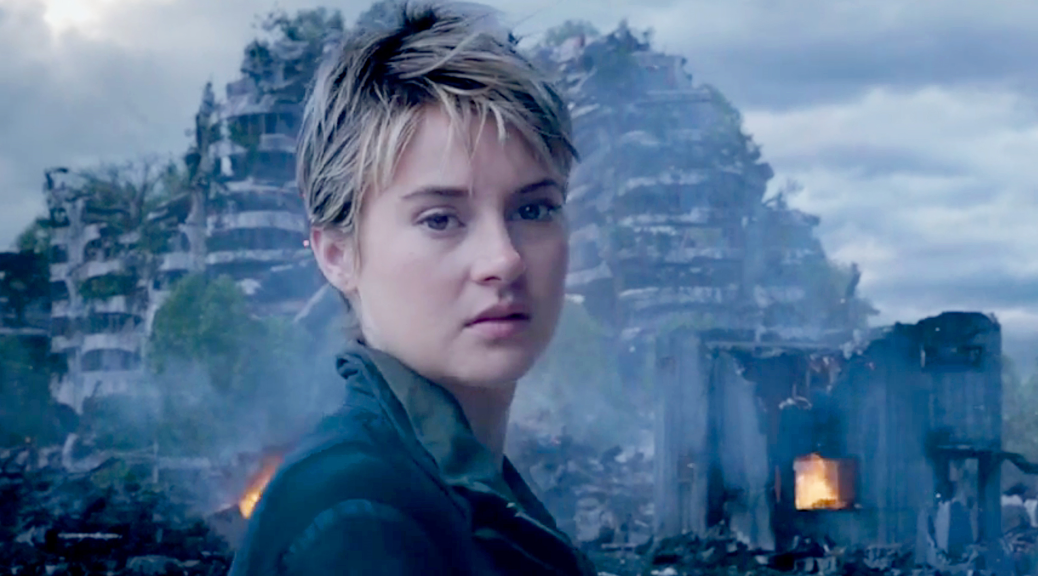 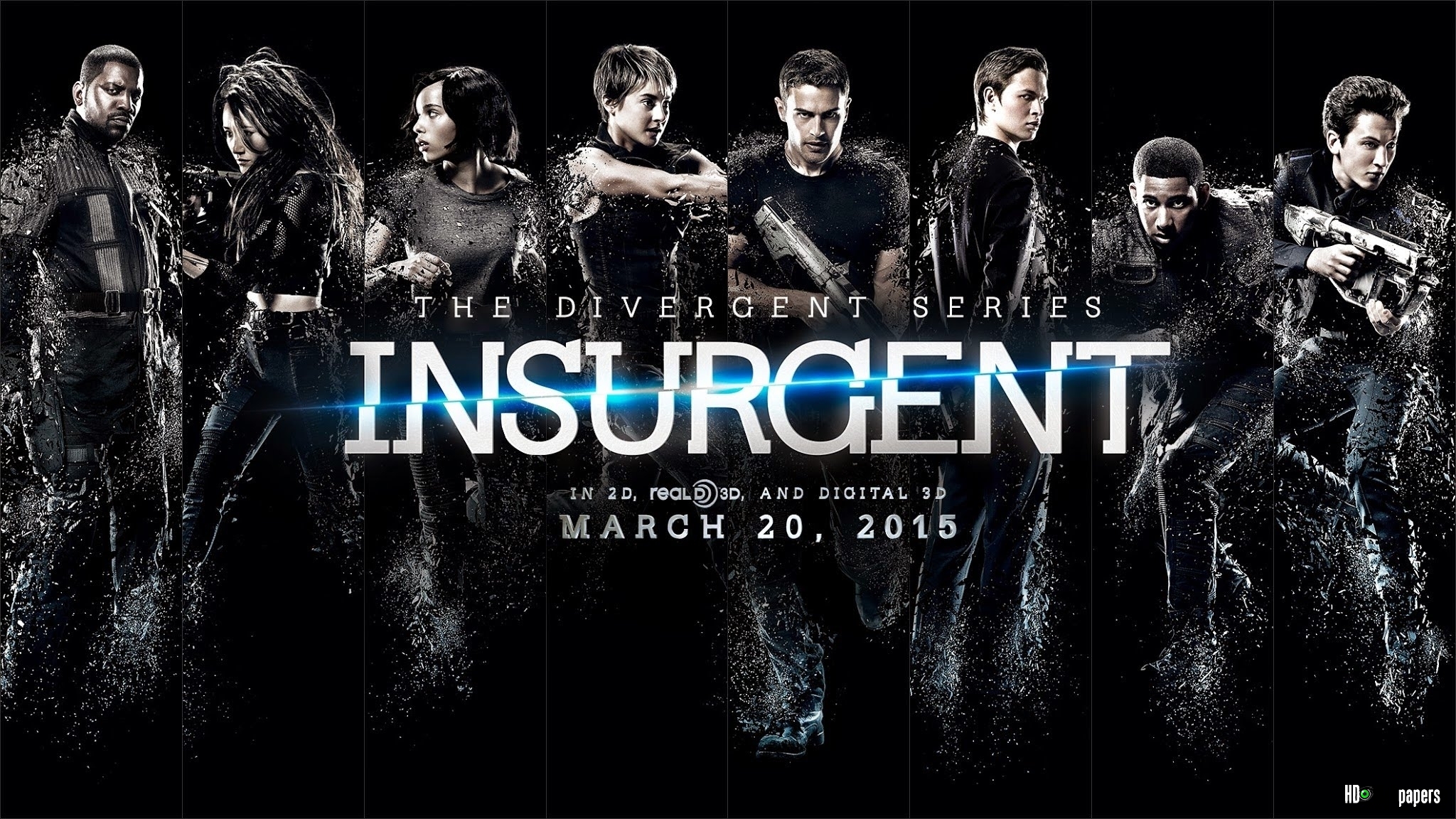 I saw The Divergent Series: Insurgent (which will hereafter be called simply “Insurgent” like a sane person would say it) several days ago and have been sitting on this review to try to remove as much of my God-given snark from my system as possible.  So keep that in mind.  Also, because the header was already ridiculously long, I didn’t include a spoiler warning, but I do so now.

I liked Divergent.  Not loved.  Liked.  You can click here to read my review of it and I felt like I gave it a pretty fair-to-generous shake.  I also mentioned in that review that there were storm clouds on the horizon since I’d read the whole series and the thunderstorm begins to pour here in Insurgent. 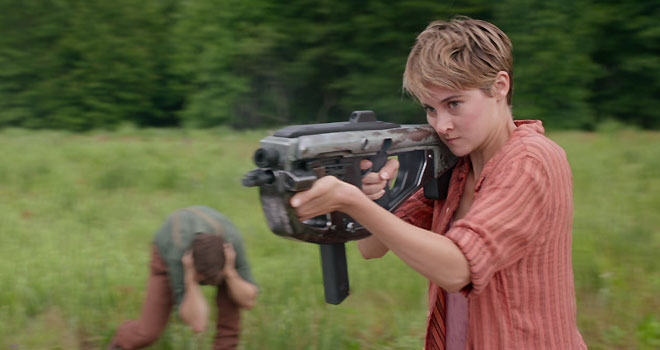 Insurgent picks up right where Divergent left off, with Tris (Shailene Woodley) and Four (Theo James) and the rest of the divergents having shattered the ordered, faction system on which life in post-apocalyptic Chicago is based.  Then the movie breaks into two halves.  In the first half, which we will call Angstyville, everyone laments the back half of the first movie and Tris more than anyone is angry and borderline suicidal.  The second half of the movie is a series of sims (fans will know; others care not) in which Tris attempts to unlock a box whilst Kate Winslet looks at her and fiddles with a tablet. 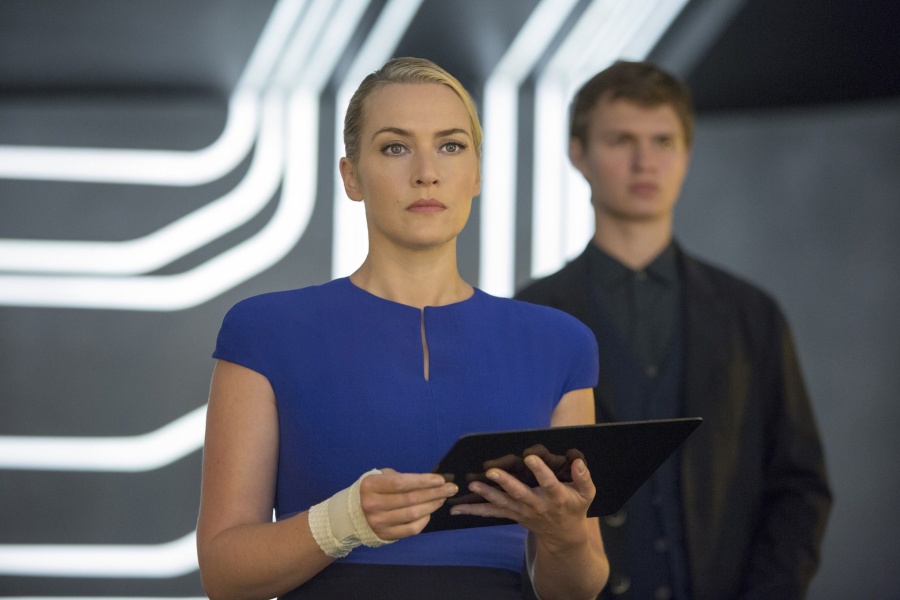 Now, on one hand this is an extreme improvement from the book which begins to badly meander from semi-coherent in book two to wretched in book three.  A significant number of Insurgent’s subplots, especially those involving Four’s parents (Naomi Watts and Ray Stevenson) were cut short or chopped out of the film altogether.  While this helps with the pace (to make it survivable), it doesn’t end up doing the series as a whole any favors, unless somehow all those elements are what is somehow going to turn book three (Allegiant) into two, separate motion pictures.  Without any true focus, the important moments in the series that do occur (including the most despicable betrayal), are stripped of any dramatic weight.

The simulations (or ‘sims’) were highlights of the first Divergent film.  In the second film, I suppose they thought they had to raise the stakes in the F/X since the plot doesn’t really do it, but what results are some of the most obnoxiously over-CGI’d sequences since films started copying The Matrix in 1999.  That banner above with everyone slowly crashing through mirrors; I put that there as a warning. Ok, so I’ve been mean, and I have most of it purged from my system, so let me try to highlight some good points.  The pacing is better than the book’s.  I read the first novel in a day.  Insurgent took me a month.  Allegiant turned into a literary Vietnam.  Robert Schwentke (RED) took over the directing duties from Neil Burger in this film, and he paces it well, but doesn’t have Burger’s talent for keeping the series from devolving into eye-rolling angstiness (not a word; should be). 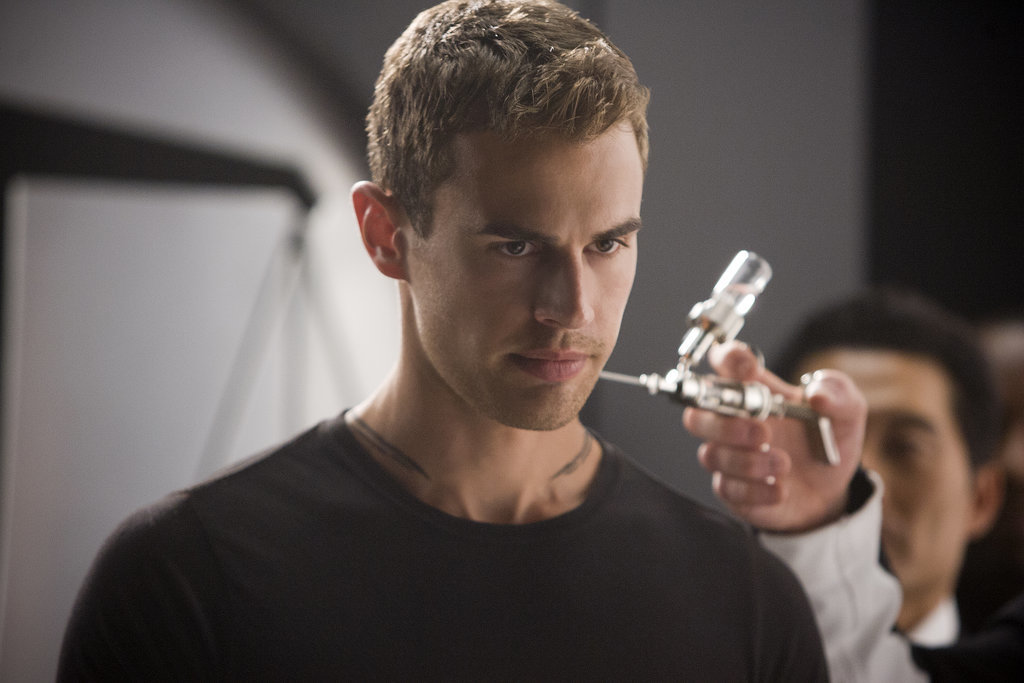 The cast of these films is inexplicably fantastic.  There are multiple Oscar winning actors and actresses in the film, and while I don’t think Theo James can act, I do actually like Shailene Woodley and feel she can.  Then, after seeing Miles Teller (Peter) in Whiplash turn in an Oscar-caliber performance of his own, I particularly was stoked to see him with the little he has to do.  However, the thing is, when you have performers this good, you have to give them something to do or they get bored.  Octavia Spencer intoned her lines and was gone.  Kate Winslet (she of tablet-tapping aforemention) gives the first legitimately bad performance I think I’ve ever seen from her.  She’s  not even trying to hide how bored she is.  Still, average-to-bad acting from a quality cast, goes a long way toward covering other flaws. 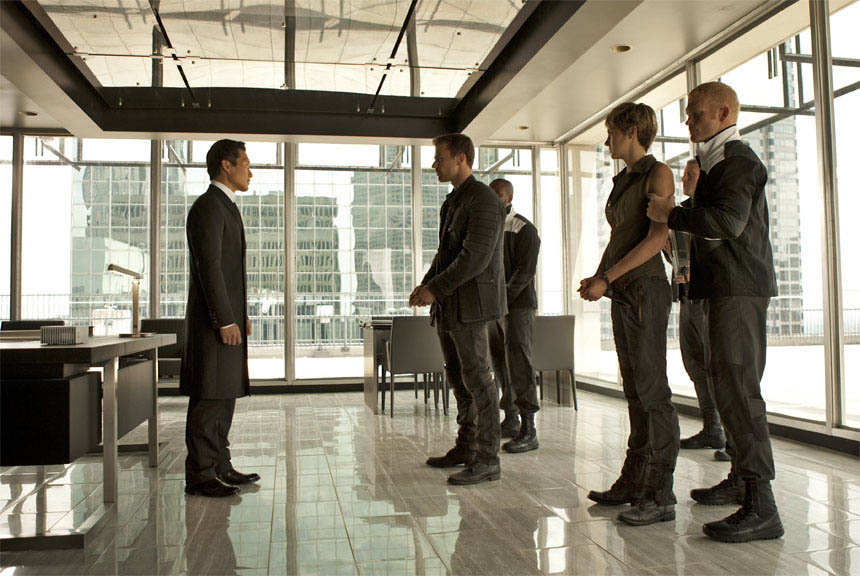 There is one thing that I would like to commend Schwentke and company for that the first film got horribly wrong: they let the film approach the violence of the books.  This has been a major criticism I’ve had of nearly every YA series adapted for the screen.  If you’re going to make brutality and violence a part of your plot and then you make a film as bloodless as a John Wayne war movie (hello Hunger Games), you’ve lost not only narrative edge but primary motivation for your characters.  The Maze Runner is the only film in this genre that I feel has managed to get it right.  In Divergent, there is a horrifying piece of violence involving Peter that defines his character so viscerally that taking it out of the film version turns him from a psychopath to a mere obnoxious ass.  There’s a large difference.  I get that you have to bow and scrape to the MPAA for that all-important PG-13 rating, but in terms of adapting a work of art from one medium to the next, it’s a perfect example of one of the key problems inherent in the transfer.  Insurgent has really no choice, now that open warfare has broken out, to up the violence and I thought they struck a balance that would have seriously benefitted the first film.

Here’s the bottom line: if you like Veronica Roth’s series, you’ll go see this film or rent it when it comes to video.  If you liked the first Divergent film, go ahead and give this a try and see what you think.  If you like it, go on to Allegiant.  If this one bores you, avoid Allegiant like a hemorrhagic fever.  I’m especially harsh on this film, because I know that were Roth a more experienced writer, she could have cut through the dross and delivered a series to remember.  This is not a horrifyingly awful movie.  It’s an average movie.  It just should’ve been more.
5.50/10