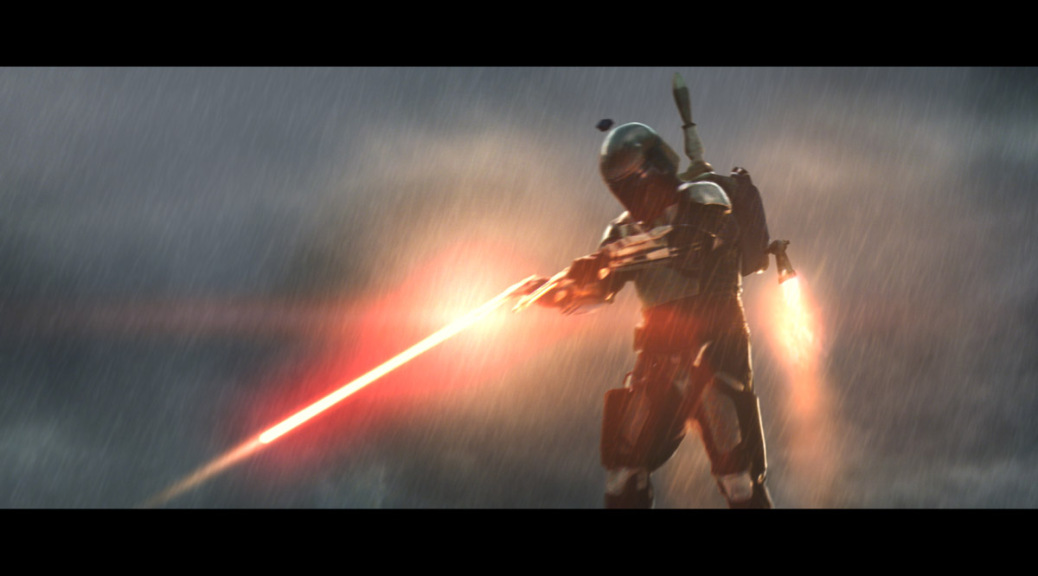 Attack of the Clones is, to my mind, the weakest entry in the Star Wars series.  I think that this is a film that should have set up the payoff of Anakin falling to the Dark Side.  We should have gotten to know the Jedi that fell during Order 66.  We should have seen more of the Clone Wars instead of just one awesome battle after nearly two hours of listening to the English language be butchered during cinema’s most painfully forced love story.  For that matter, I’ve never understood why Count Dooku was necessary as a character.  Most of his back story was only established in the EU and letting Maul live or bringing Grevious forward a film would have been more interesting.  Ok, I swore I was going to focus on the positive things, didn’t I?  There ARE cool things in Attack of the Clones.

The obvious choice for best scene is Yoda’s jaw-dropping transformation from doddering ancient to frog-on-steroids lightsaber acrobatics.  That’s awesome, but ugh, I’m going to break my rule again.  Like I said in last week’s look at Episode I, the duels in Star Wars aren’t just fights, they’re very personal.  The duel at the end of Episode II WOULD have been personal had we known that Dooku was Yoda’s old apprentice.  Anakin and Obi-Wan’s beatdown prior to that felt impersonal, and I’m not sure why Anakin needed to lose his hand if he was going to lose 75% of his limbs in the next movie anyhow.  It does seem like lopping off a hand is a Star Wars tradition now (beware your limbs, Episode VII characters!).

It is a cool fight, but it doesn’t have the emotional gravitas that every other duel in the series has had.  The opening battle of the Clone Wars is great, though Lucas’ extended tribute to Ray Harryhausen in the arena felt indulgent.  The best rivalry in the film, to me, is the one that develops between Obi-Wan and Jango Fett.

Kamino was a fantastic planet design.  It was an environment unlike any we’d ever seen in the Star Wars universe.  You had these ethereal, yet oddly sinister beings churning out an army in vats (though the entire story behind the machinations that created the Clone Army wasn’t addressed in the films and The Clone Wars TV series had to sew up that plot hole).  The fight between Obi-Wan and Jango is my favorite scene in the film and is a duel unlike any other in the series.

You know we’re going to get a lot more Boba Fett.  He’s going to show up in the Han Solo spin-off, he’s confirmed for Star Wars: Rogue One (along with a ton of other bounty hunters) and we’re going to get to see him in his prime, which the previous films really only hinted at.  Jango is our best substitute for a full-on Boba Fett in action and that he’s a match for Obi-Wan in this fantastically choreographed fight, gives you a little more perspective on why the clone soldiers were such better fighters than the later Imperial Stormtroopers.  The rain, Slave I, ahhh, this is good stuff.  This was the best Episode II gave us, and now I swear I won’t nitpick the next four weeks since we’ve made it through the choppy waters.