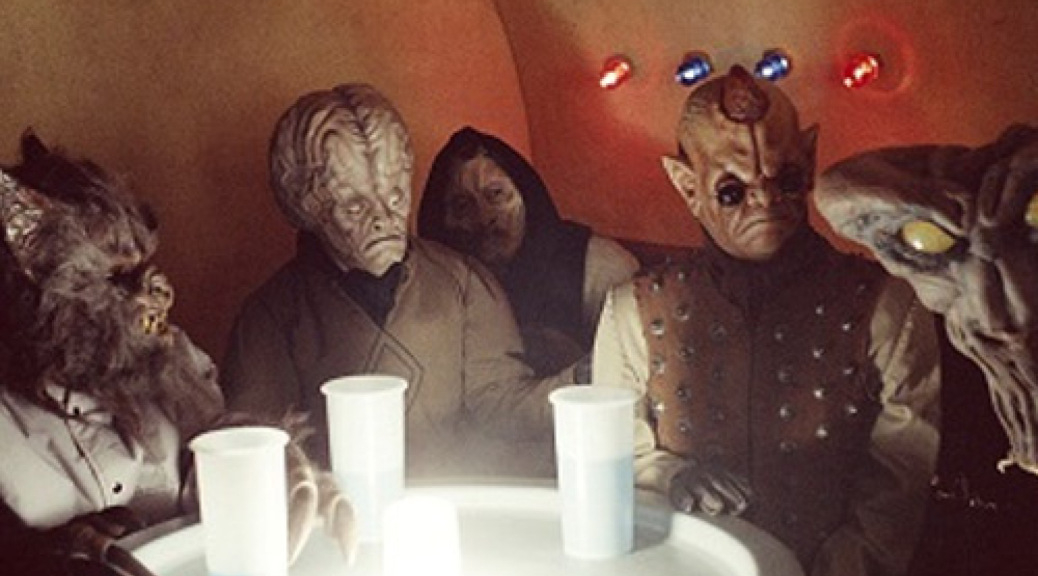 Week four of our journey through the existing Star Wars films takes us back to 1977 and the original that spawned a universe of fiction that will outlive us all.  A New Hope is, structurally, a very simple story.  It’s Campbell’s hero’s journey….but with a hairy space ape.  What makes that journey work in so many different ways in so many different genres is what you can do with it and Lucas created something so deep and yet so simple that it can be divided in to the Light and Dark sides of something that it has endured, grown and enraptured multiple generations of fans.

The Mos Eisley Cantina scene is when Star Wars becomes Star Wars.  They walk into that bar, and every possible creature you can posit is there drinking.  The scene itself, is straight Western down to the gunslinger’s fight at the end.  We see a lightsaber in combat for the first time (which was obviously malfunctioning since it drew blood).  We met Han and Chewie.  It’s just a fantastic scene that Lucas is still defending ruining by having changed the end where Han shoots Greedo under the table.

Here’s why the whole “Han Shoots First” thing drives fans nuts: it messes with his character arc.  Beyond the fact that the F/X look ridiculous, Han doesn’t go through a journey if he’s not shooting guys under the table from IV to leading a Rebellion in VI.  The thing that’s so stupid about Lucas’ insistence on changing it, is that it’s not cold-blooded murder.  Greedo is a BOUNTY HUNTER and had just told Han that he’d been looking forward to killing him for a long time.  Um, them’s fighting words.  Put in the same situation, I blow him away too.  You’ll note the original version of this scene is the one included.  WE ARE IN THE MONTH OF A NEW STAR WARS FILM!!!