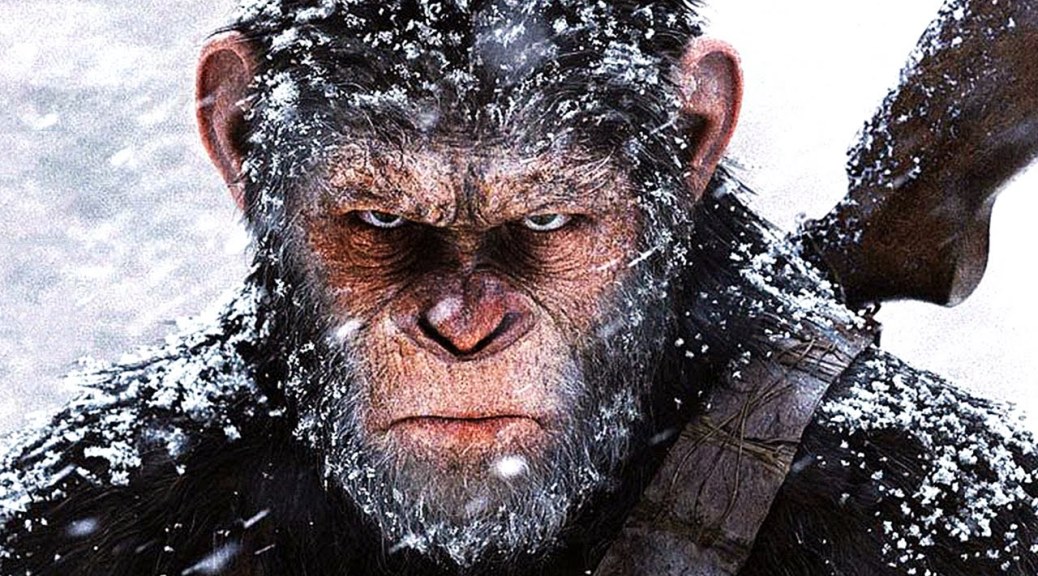 Director Matt Reeves has elevated himself with Dawn and War into one of the best directors in Hollywood, and delivers a finale to this trilogy that is in no way the film you expect when you walk into the theaters.  A very smartly done recap informs us that it has been two years since the end of Dawn when the human army was on its way to begin what we thought was going to be the titular war.  Caesar has, instead, been hiding his people in the woods, hiding, moving around, and the film opens with humans finally cornering the apes.  What was contained in the trailers, that most assumed was this final battle between the rising and falling civilizations takes place in the film’s first act, sets up Woody Harrelson’s wickedly delightful Colonel, and throws a hard twist into your expectations for what this film is going to be.  I don’t want to spoil anything, so that’s all I’ll say about plot (the twists are too good, too smart, and too powerful to throw them away in a review).

One plot point I will dwell on is that the climactic fight between Caesar and Koba at the end of Dawn in which Caesar breaks his own rule and kills another ape has massive repercussions in this film.  That’s one of the few things I didn’t quite feel were right with Dawn; Caesar justifying Koba’s death.  Two years later, that decision is still haunting Caesar, it’s changed Caesar, it’s changed how Caesar plans and reacts, and the apes who followed Koba’s rebellion did not return to the fold.  I thought that was an extremely wise bit of writing (Reeves also co-wrote the script), and it makes Dawn’s climax even more powerful in retrospect. 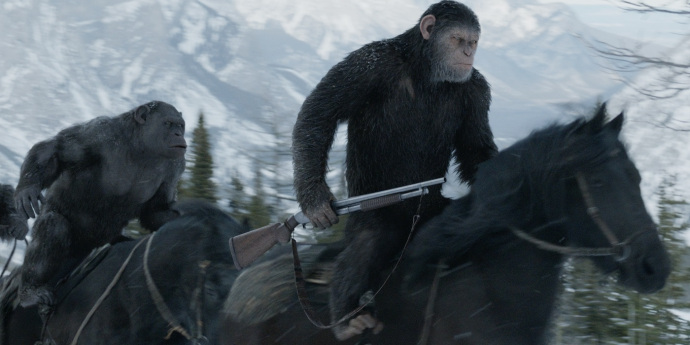 What can you say about Andy Serkis at this point.  I just wrote a whole paragraph where I talked about Caesar like he was a real being, because that’s what Serkis has made him into.  What began with Gollum has been perfected in Caesar.  Gollum was a supporting character.  Caesar carries these films and the mo-cap is so good that you don’t even think about the apes as being F/X.  That’s the ultimate goal.  Serkis’ command of his body and the nuance he puts into ever facial expression of Caesar and his quiet, steely, and now fully fluent vocals have made this the most astonishing performance in Serkis’ career.  The rest of the ensemble shines too, especially Steve Zahn as Bad Ape (a badly needed bit of balanced comedy in a film that is very grim) and Karin Konoval as Maurice.

If you’ve enjoyed the previous Apes films, this is going to be a wonderful finale.  If you haven’t given the trilogy a chance because Planet of the Apes isn’t your thing, hey, it wasn’t really mine before this won me over.  I have a few quibbles, and I think they could have trimmed this ten minutes or so, but this is one of the best movies of the year, not just a treat for sci-fi genre lovers.  APES. TOGETHER. STRONG!!!