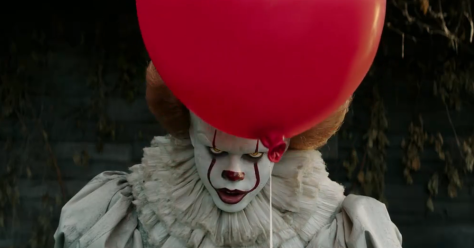 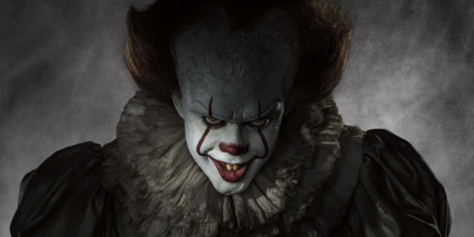 Stephen King’s epic fantasies The Dark Tower and The Stand constitute his best work, but when it comes to pure horror, IT is his magnum opus. The novel is a monster of a book, the most intricate, powerful, engaging horror tale he ever wrote. It concerns a group of misfit 1950s children who discover that an entity from another dimension has come out of hibernation and is terrorizing the denizens of their small Maine community. The demon feeds on fear by killing people, especially children. IT frequently takes on the form of a circus clown named Pennywise, but its scariest attribute is its ability to embody whatever its victims fear the most. King’s novel leapfrogs between the heroes’ past and present, as they confront IT as children, then later as adults

The new movie, the first part of a projected two-part adaptation, focuses on the parts of the novel that chronicle the characters as kids. Other than the setting, which has been updated to the 1980s, it’s a lovingly faithful adaptation, and the act of paring the story down into two hours has turned it into something akin to a fable: a simple, meaningful tale about overcoming your fears by facing them head-on. After a gruesome opener, which depicts the horrible murder of a small child, there is not a lot of graphic violence in the movie. In fact, the terrors that dog the young protagonists are often kind of goofy: the germaphobe sees a leper, for example, while another kid is tormented by a distorted figure from a creepy abstract painting.

Audiences unfamiliar with the book can be forgiven if they think the clown is the true form of IT, instead of a manifestation of an inter-dimensional entity. While IT’s true nature will no doubt be addressed in part two, in this movie IT is an abstraction, a stand-in for the idea of fear.

Human beings do the most disturbing things in this movie. And when, in the course of standing up to IT, the child heroes are motivated to stand up to the real-life sources of fear in their lives—the psychopathic bully with the knife; the evil, incestuous father—it’s the most satisfying part of the film, even more satisfying than the climax. IT is an overall good-spirited horror movie. It’s so good-spirited that some fans of the genre
might be ticked off. But this humble Reasonable Critic appreciated the paradox.

Now for the very, very bad news. You would not know that IT was King’s horror masterpiece from this movie. Not even close. IT was made with love, no question, but it was made with love by a director with myopic vision, who only knows how to do horror. Whenever the clown is on-screen, being played to dark perfection by Bill Skarsgard, and whenever supernatural evils are occurring, the director, Andy Muschietti, is on sure footing. With most horror movies that would mean success, but the novel IT is as much a coming of age tale like Stand By Me as it is a horror story. It needed a director like Frank Darabont to bring it to life; when it comes to masterful King adaptations he’s going three for three right now, and I can only imagine his IT. As it stands, IT is flat, limited, and clichéd. The worst thing about the movie is that the kids are not remotely convincing. Not because the young actors give bad performances—in fact they are extremely likable—but because the script, by Muschietti, reduces them to types.

As I left the theater, I knew that IT would be a smash. The audience reaction was just too positive and intense. It’s hard to argue with success, I was just expecting more.

6.75/10
*The Reasonable Critic is the Lord of the Forums at Killing Time and occasional guest columnists. He was good enough to review this cultural phenomenon since I have a no-joke clown phobia.  Thanks be to, RC!