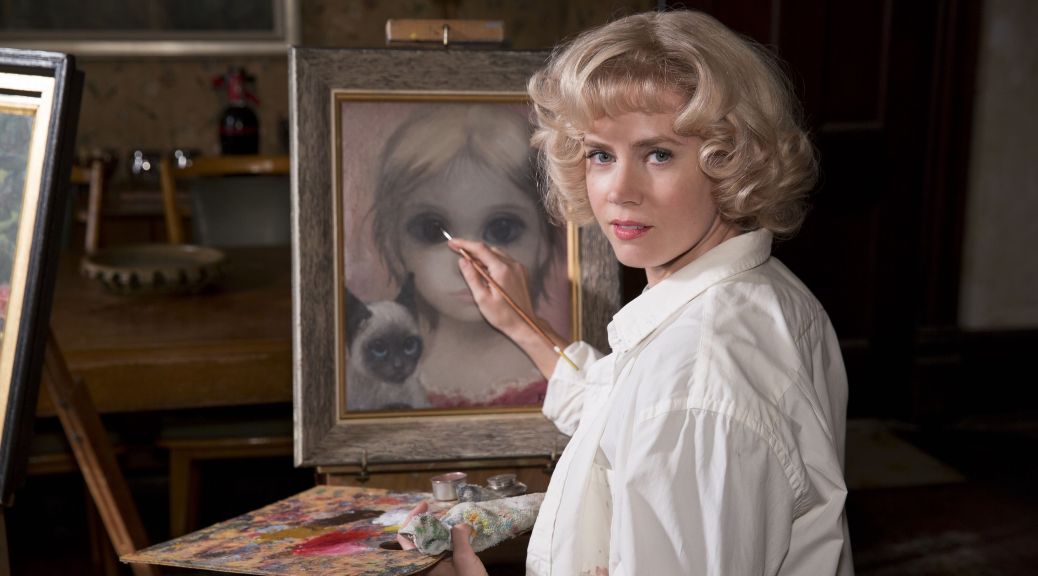 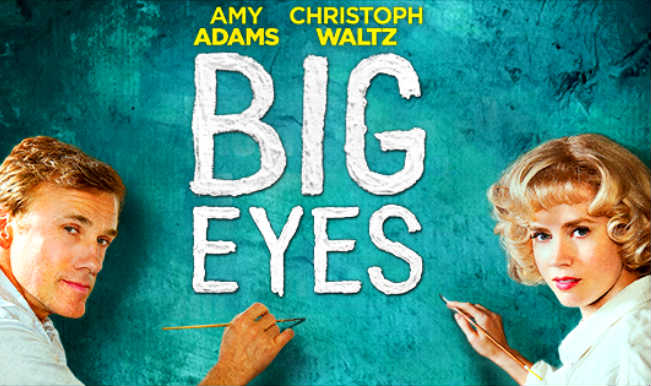 At the risk of sounding like a heretic, there was nothing wrong with Dark Shadows. It was a pretty good film in its goofy way. And if Tim Burton had made it in the years between Batman and Ed Wood, people would have enjoyed it. But Burton, aided and abetted by his longtime collaborator Johnny Depp, had gone to the gothic/whimsical well one too many times. Dark Shadows was also the first indication that people were tired of Johnny Depp. The weird costumes and makeup that had once made him seem so uninhibited had grown into ritualistic obligations. And Burton’s trademark style, so enchanting back when he made Edward Scissorhands, was now familiar and rote. 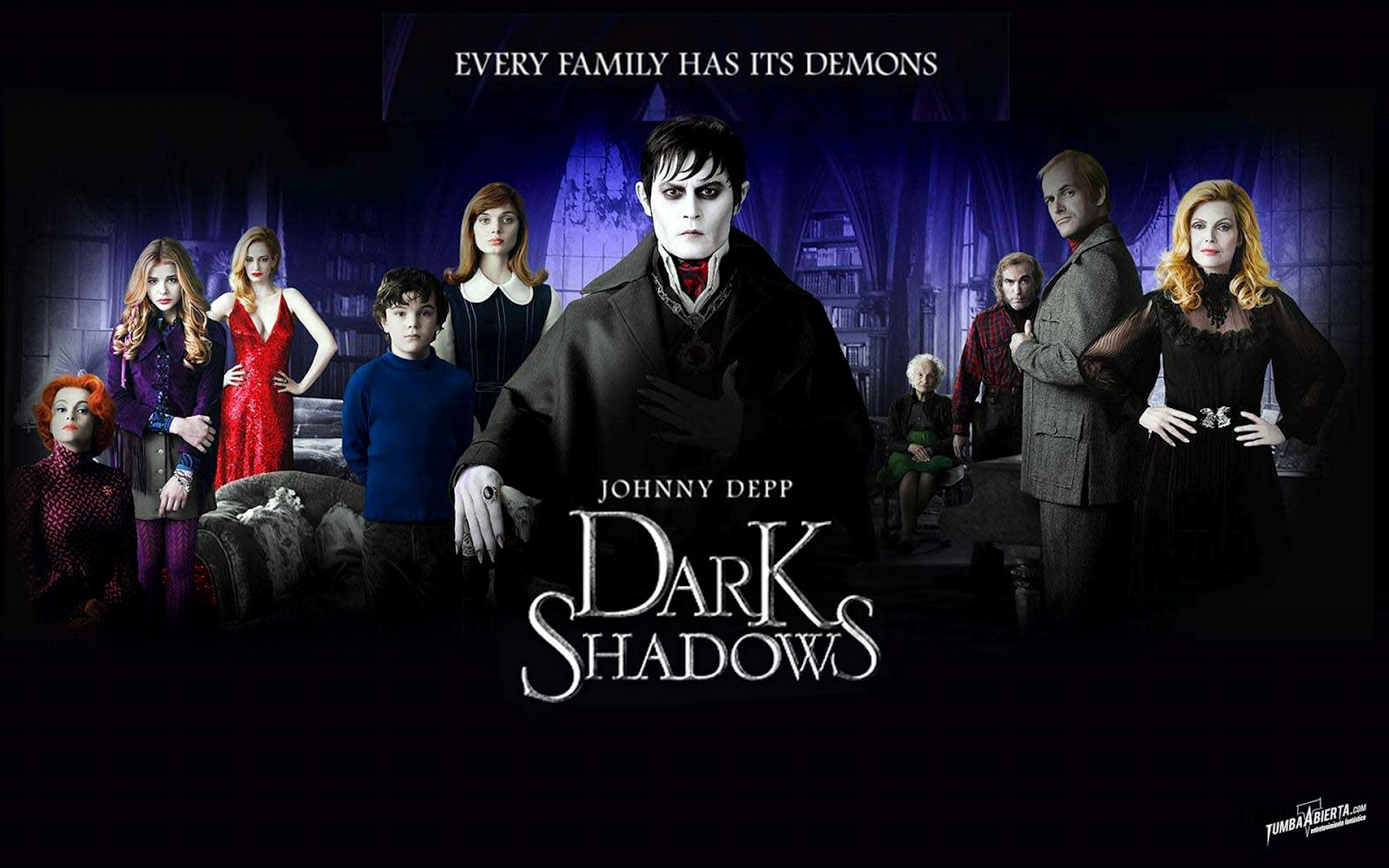 The Burton who made Big Eyes is still very much the Burton who made Edward Scissorhands, but unlike Depp, he learned a lesson from Dark Shadows and is shaking up his career. Big Eyes, a modestly-scaled biopic, makes it official: Burton creates his best movies while working within the constraints of smaller budgets. That’s not to say he hasn’t directed oddly personal blockbusters. The operatic Batman Returns is a study of emptiness and alienation in an urban setting, and Mars Attacks! is about the weeding out of the human species. But even Burton’s best big films tend to lurch from plot point to plot point, with pacing that’s unnervingly off. 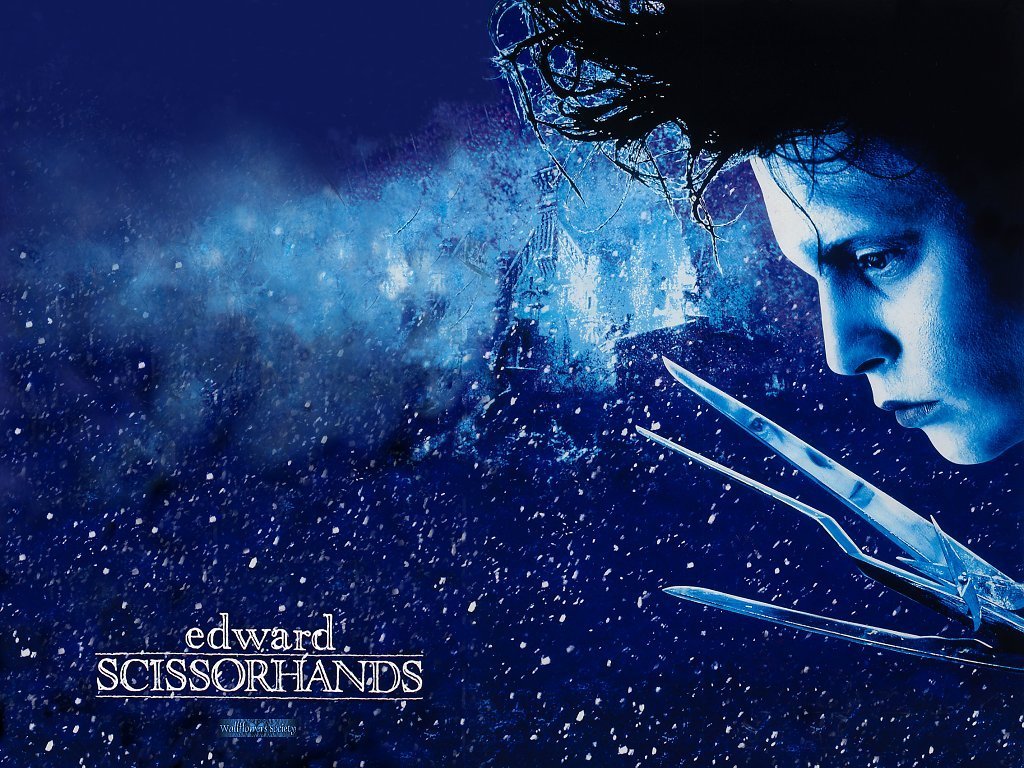 Still, you have but to watch Edward Scissorhands to recognize the auteur in Burton. That film gradually evolves from a comedy to a tragedy, and Burton is in total control of the tonal change. In another masterpiece, Ed Wood, Burton takes the sad life of the worst filmmaker who ever lived—and the final days of a depressed, morphine-addicted Bela Lugosi—and turns it into a fanciful, optimistic film about individualism and the importance of following one’s own star. When Burton tells a story he truly connects with, he’s capable of the oddest, most effortless atmospheric contortions. 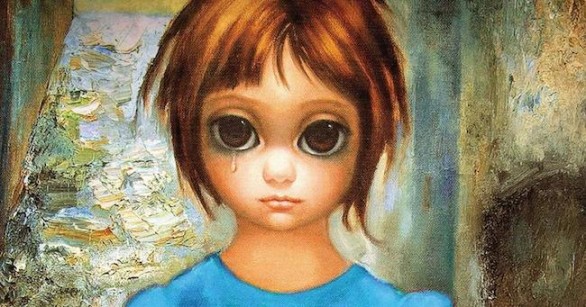 His latest gem, Big Eyes, is a black comedy that recounts events that would seem too strange to be true if they hadn’t really happened. In fact, it’s amazing that the story was never widely reported until now. In hands of Burton it’s a fable, just like Edward Scissorhands or The Nightmare Before Christmas. 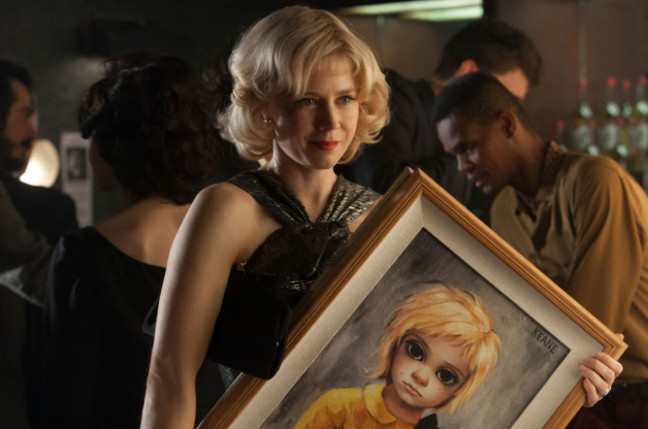 In the 1950‘s and 60‘s, Walter Keane revolutionized the marketing of art with his paintings of big-eyed children, and (more importantly) cheap reproductions of the same, which sold millions of copies. But Walter was a con artist with zero artistic talent. For over a decade he took credit for the paintings of his wife, Margaret, who played her part in the ruse, pouring her soul out into her art while receiving no credit. 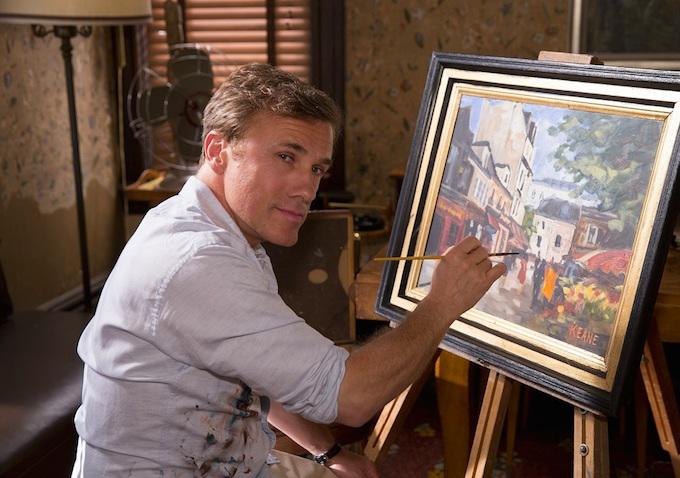 Why did Margaret Keane go along with the lie for so many years? Several surface motivations are suggested by the film. Walter tells Margaret that a woman’s art would not be taken as seriously as a man’s, and back in the day that was certainly true. And Margaret needs Walter because, as we come to see, she’s a terrible salesperson. Walter seduces her with money, though she is never able to enjoy it. And as time goes by, the lie has to be maintained, because it’s become so firmly entrenched. Her actions; however, are never definitively explained. That might have made for a shallow treatment, but instead it works to the film’s advantage. A light is shone on the blanket sexism of the era, and the question of why she lied is kept in the air. 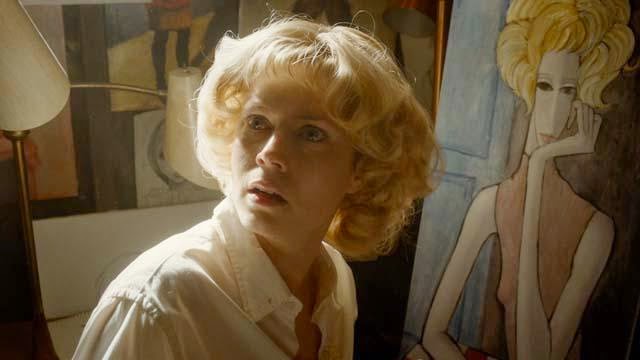 The film begins in a California neighborhood straight out of Edward Scissorhands, sans the pastels. Margaret takes her young daughter, leaves her first husband, and moves to San Francisco, where she tries to get a job—no easy task for a single mother in the 1950’s. Then along comes Walter. Margaret falls for the charming, extroverted artist, who says he trained in Paris. And Walter seems to peg Margaret as an easy conquest. 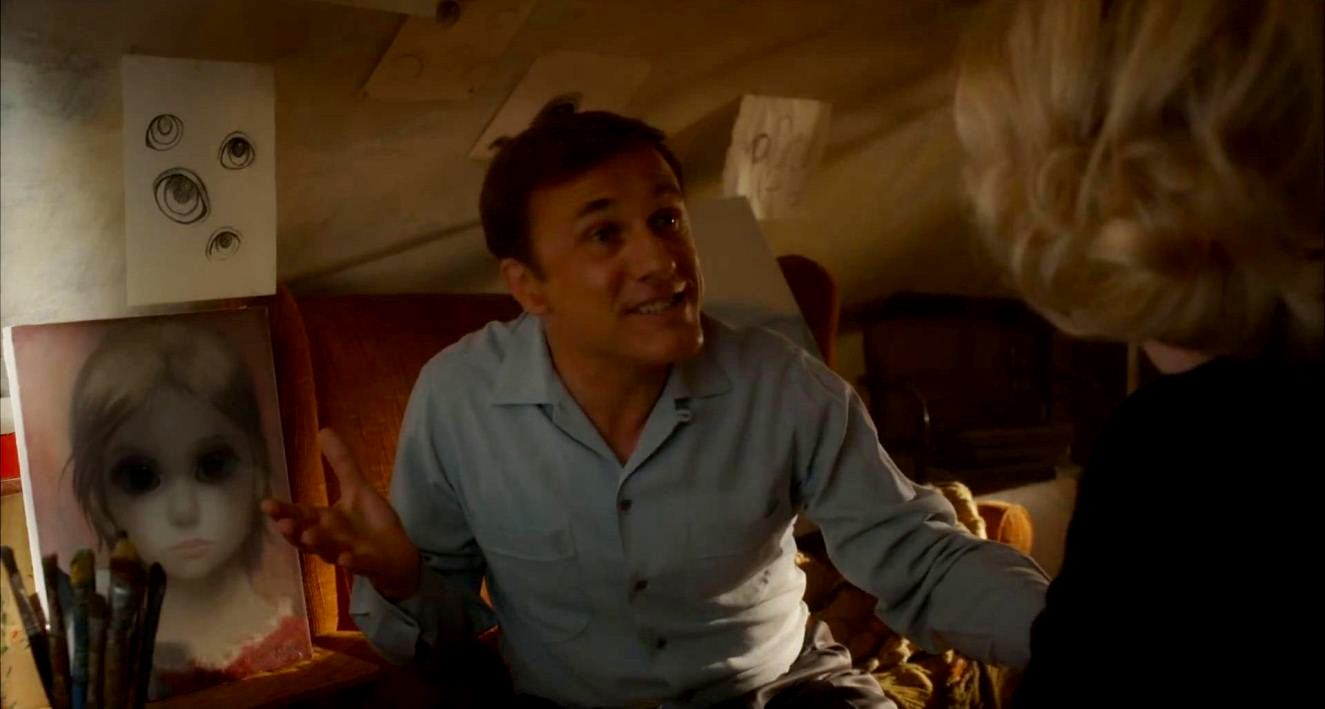 Christoph Waltz gives the most over-the-top performance of his career. As Walter he is funny, easy to hate, and—in at least one scene—genuinely scary. Nothing about Walter is real. Everything about him is a lie. In that respect he is almost satanic. And the funny thing is, he’s not that good a salesman either. He just has chutzpah in spades.

Meanwhile, Amy Adams carefully balances understatement and edge in her role as Margaret. The character could have easily come across as a spectator in her own story, but Adams avoids the trap. Big Eyes has been labeled a feminist film, but I’m not sure Margaret views her transformation through that lens. She just wants credit where credit is due, and when she emerges from under Walter’s thumb her conservative, buttoned-down manner never changes. Like every Burton hero, she is who she is.

Big Eyes culminates in a courtroom showdown, and it’s the most satisfying final act since the end of The Shawshank Redemption. The sequence seems unbelievable and even campy, but Burton insists the real events were toned down for the movie. 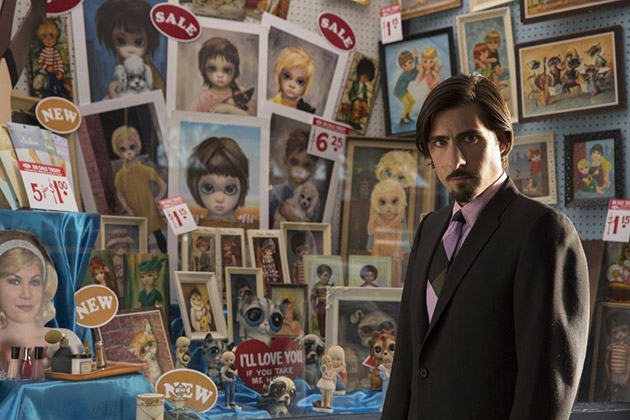 It’s hard to admit after watching her story, but Margaret’s paintings aren’t that good. At one point an art critic, played like an immovable rock by Terrance Stamp, enrages Walter by condemning the paintings as kitsch, and that opinion is never challenged in the film, not once. Even worse, the paintings would certainly not have become so popular or ubiquitous if it hadn’t been for Walter’s engineering.

In Big Eyes, Burton is repeating his Ed Wood message. I’d like to believe it’s not for a lack of new ideas, but for emphasis. In essence: Margaret Keane created something that wasn’t there before, she put herself into it, and the actual quality of the art need not apply. The power of Big Eyes rests with the sad image of an artist, cooped up in a little room, creating paintings that no one will ever know she created. The purpose of art is to free the soul, not to make a million dollars. 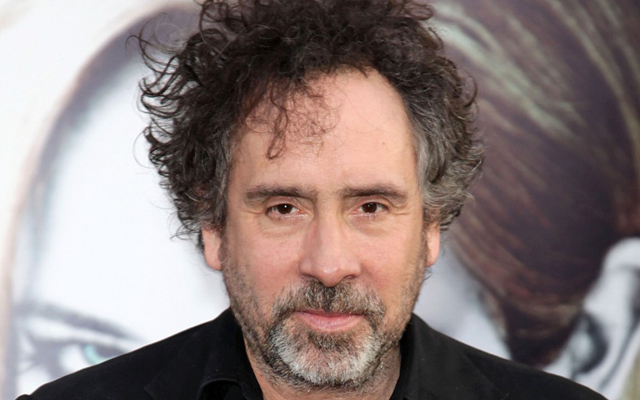 Big Eyes is Burton’s most adult film. It takes some time to get going, but once it does it holds you till the end. It’s a little strange, and it’s only lighthearted when compared to the rest of Burton’s oeuvre, but it’s a crowd pleaser. Burton makes the most of his $10 million dollar budget, reproducing the 1960’s milieu with style, and it’s refreshing to see a film set during that period that has nothing to do with the counterculture movement. Danny Elfman’s music for Big Eyes is instantly forgettable—at some point along the way his scores to Tim Burton movies stopped being catchy—but be sure to stay for the end credits to hear a wonderful original song by Lana Del Rey.

Finally, while I loved this movie, I don’t want to oversell it. Make no mistake: it is a minor work. It was hyped as Burton’s return to form after a string of glossy, impersonal blockbusters, but he directed it like he had nothing to prove, which might help explain the less-than-enthusiastic reviews it received, and its poor performance at the box office. But, like Ed Wood, it will find an audience in the years to come. Burton has re-energized himself, and as Big Eyes attests, you can’t keep a dedicated artist down.
8.0/10