Dunkirk is Christopher Nolan’s 10th film.  In 10 films, Nolan has already put together a body of work that marks him as the best director of his generation, but he’s still getting better.  The Miracle at Dunkirk is one of the most important moments of World War II and Nolan immerses you in it in a complete sensory experience.  He combines staggering IMAX cinematography, lightning-fast editing, multiple perspectives, and a score designed to make you as tense as the soldiers on the beach to produce a film that still feels like a Nolan film, but is also the best war film made since Saving Private Ryan and 2017’s best film to date. 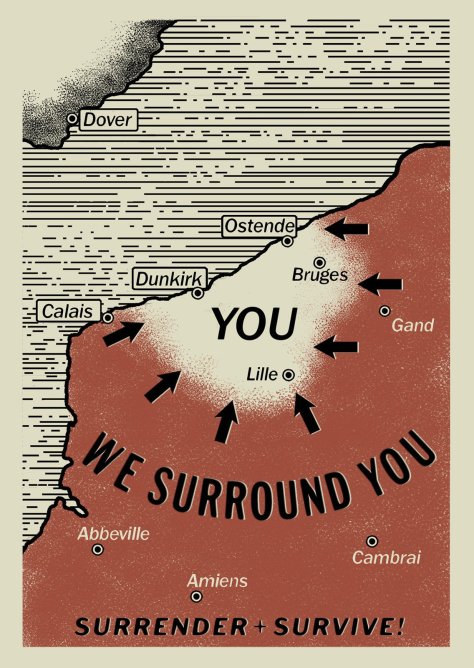 Nazis showering soldiers with this leaflet opens Dunkirk and quickly establishes the bleak position the British forces are in on the beach.  It’s May 1940, and in eight months Hitler has rolled east and west across Europe, so fast, and so devastatingly that they’ve trapped 400,000 troops with their back to the English channel.  Rather than wasting troops or tanks, Hitler’s bombers and fighters are making runs on the beach picking them off from the air.  Britain was next on Hitler’s list, and the eradication of the army on the beach would leave the isle woefully undermanned.  Nolan gives you this flier at the beginning along with the time it takes to make the journey across the English channel, and then you’re dumped right into the conflict.

Dunkirk is not about dialogue (though this had to have been one of the most difficult screenplays of Nolan’s career in terms of the logistics of constantly interweaving storylines), it’s not about big actors, it’s not about Hollywood moments, and it’s not about character development.  The movie puts viewers inside the experience, and doesn’t coddle them.  You follow four main threads: the soldiers waiting on the beach, two soldiers moving from doomed vessel to doomed vessel, a wing of fighter pilots trying to defend the ships from the air, and one of the hundreds of ships (693 in total) that ferried soldiers across the channel.  Nolan can’t help but play with non-linear time a bit in how this storylines converge, and I was worried for a bit he was going to lose the human element or the grand impact of what Dunkirk meant for the war, when everything comes together in a moment of convergence and it’s about then that you realize that you’ve been in a full-body clench from the tension since the film began. 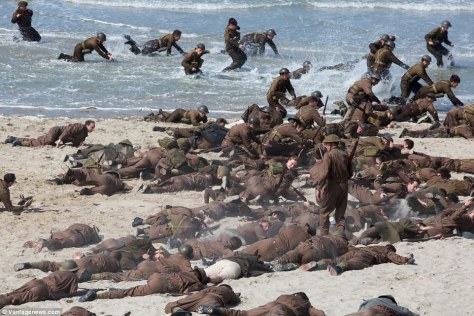 Pete Hammond in Deadline’s review of Dunkirk had a great line: “this is a war film that Hitchcock would have loved.”  That’s so true.  Just as Hitchcock was the master of building tension, Nolan uses the urgency of the situation, quick cuts between his story threads, and sound and score to build an almost unbearable tension in the audience.  No one talked in my theater.  No one took their eyes off the screen.  People were just hanging on.  Sound plays such a huge role in Dunkirk’s success, a constant ticking of the clock combined with the sounds of war and Hans Zimmer’s masterful score do as much to establish the film’s tone as any explosion or dogfight.  Zimmer’s score is a perfect example of one that works for the film, but one you’ll never find yourself humming.  Much in the way he created a dissonant sound of dread for the Joker in The Dark Knight, Zimmer crafts an entire score around creating urgency and fear.

It’s absolutely essential that, if you have any interest in this film at all, you go see it in the theaters and you see it in IMAX.  Most movies, it really doesn’t matter, but it does with Dunkirk.  The immense shots of the beach, but most especially for the aerial dogfights, which are nothing short of incredible.  Nolan hates CGI and only uses it when he absolutely has to, so I know he restored these WWII planes and staged these amazing aerial battles while filming them in IMAX; I just have no idea HOW he pulled it off. 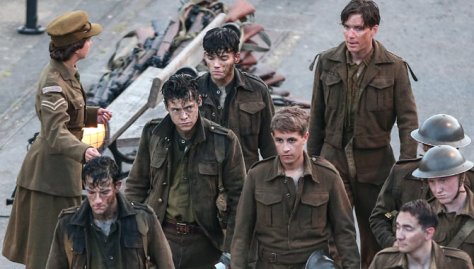 It’s sad, but given the state of most people’s interest in history, if there isn’t a movie monument to an event, it’s most likely to be forgotten by the majority of people.  That’s sad, but Dunkirk provides a fitting memorial to the bravery of one of the most important moments in World War II, the soldiers who lived through it, and the British people who took pretty much anything larger than a bathtub with a motor and sent it across the Channel to bring their boys home.  It’s an astounding story and an equally stunning movie homage.