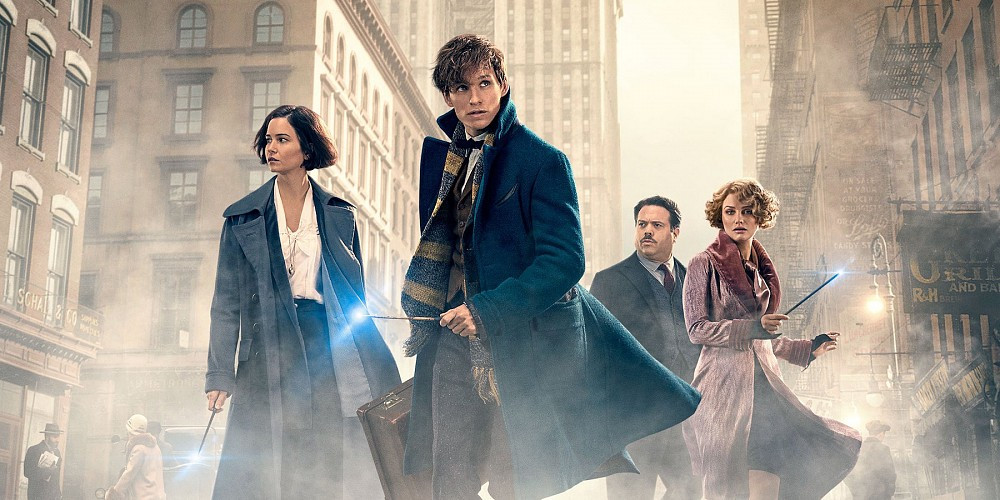 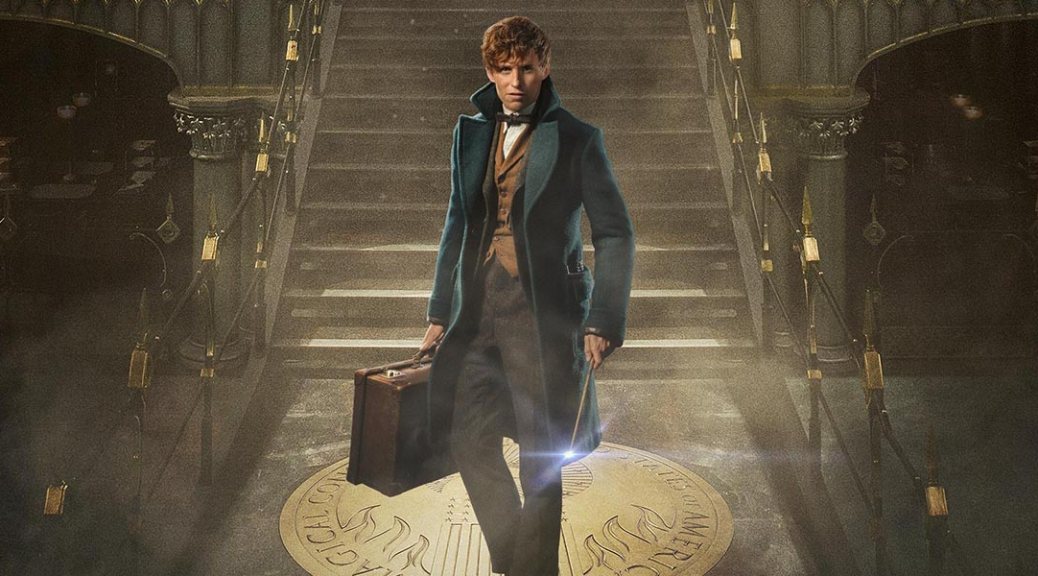 I honestly wasn’t quite sure what to think going into Fantastic Beasts and Where to Find Them.  The book of the same name is a 40 page bestiary that was published during the course of the original Harry Potter series with the conceit that it was Harry’s actual Care of Magical Creatures textbook from Hogwarts.  That a five-film series was being planned based on that, set 80 years or so before the events of the Potter series, with a completely new cast, set in America not the integral Britain of the books, and that Rowling herself was going to write the screenplay (her first, and screenplays are very different from massive novels, another beast entirely you could…yes I hear you, no more puns)…..all this uncertainty lowered my expectations.  I thought the film would be good.  I really shouldn’t have doubted Rowling.  Fantastic Beasts and Where to Find Them is definitely in Harry Potter’s world but creates a detailed, charming, and-at times-frightening first installment in a brand-new saga. 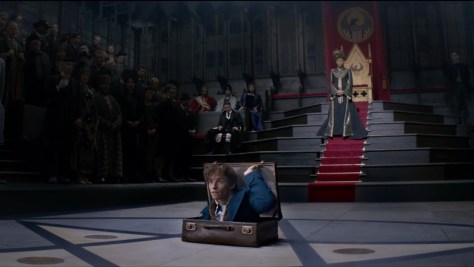 I have a method to my reviews in that I don’t talk about plot very much other than to give my opinion of it.  I don’t do spoilery reviews; I don’t understand why you would want to know before you go unless it’s to prep you for disappointment.  So I stay away from specifics.  If you’ve read the Potter novels, you know what an amazing plotter JK is.  In fact, in terms of long-term planning of an intricate world plotted out in such a way that items that seem of no importance in, say, book two, turn out to be of unbelievable importance five books down the line.  Her first screenplay packs an incredible amount of detail into 132 minutes, because there is no book to direct people back to if they want to know the full-fleshed story.  I was listening carefully to every line and there plenty of Potter Easter Eggs that make it clear that we’re in The Wizarding World (which may ultimately become the name of this franchise), and that this film and the four to come are going to inform very much upon the established Potter canon.

Fantastic Beasts takes place entirely in America, showing us for the first time, the differences between the American magical community versus their British counterparts.  They have a different political system, MACUSA (Magical Congress of the United States of America).  They have their own slang.  In the books and films, non-magical people in Britain are famously called “muggles”.  In the US, they’re called “no-majs”.  Remember the first time you saw Hogwarts or Diagon Alley onscreen?  You had your mental picture from the books, and the filmmakers really captured it, but walking into the MACUSA or beholding the true wonder of Newt’s suitcase?  They’re moments of such dense imagination in every corner of the screen, and you begin to realize how big this Wizarding World is and how many stories it could contain.  For a first screenplay, for any screenplay, Beasts is remarkably polished.  It’s a first film so it has a lot of introduction to do and things take a while to get going, but Rowling’s voice as a writer is clearer here than in any of the Potter films because there’s no go-between.  I think subsequent scripts are only going to get better.  Suffice it to say, the plot will keep your interest. 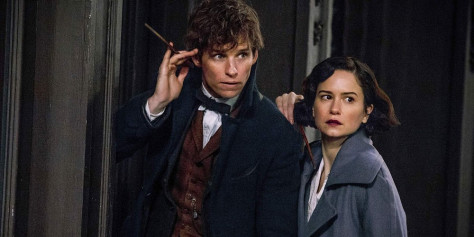 But I’ve gone ahead and gotten ahead of myself and forgotten to introduce Newt Scamander altogether.  Newt is arriving in America with is much marketed suitcase of creatures, after a year in the field.  Eddie Redmayne continues to impress me more every role I see him in, because he creates an entire character.  His speech, his walk, his initial facade are all defensive.  He’s reclusive.  He’s better with animals than people (I think he and Hagrid would have gotten along splendidly).  For the first bit of the film I was beginning to think him a blank slate almost, but we find out more and more about why he is who he is, but not nearly enough (which for a first film is probably just right). 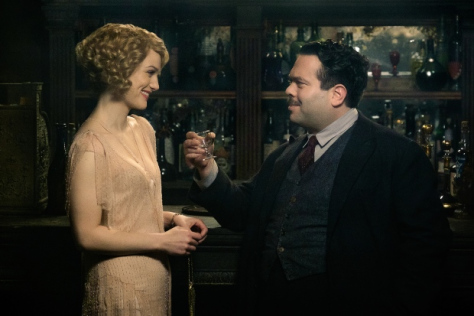 Redmayne’s backed up by an American Auror (Katherine Waterston), her sister (Alison Sudol), and a no-maj who gets sucked into Newt’s disaster as there is a mass breakout from the suitcase: Jacob Kowalski (Dan Fogler).  Dan Fogler nearly steals this movie.  His character is so good, so funny, so earnest, and so endearing that I hope we see him in future installments.  Colin Farrell does a great job as a powerful member of the MACUSA, and Ezra Miller is frigtening as Farrell’s mole inside an anti-magic society (a not-quite-so veiled allegory to the people who freaked out over the Potter books).

The Harry Potter books were not written to be children’s books; Scholastic decided to market them that way because they thought them a better audience than adults.  That may be true for the first two books, but the rest of the series can become incredibly dark, a lot of which did not make it into the films.  Far from being a fluffy film, this is possibly the darkest film yet.  There’s a New Salem Society decrying the evil of magic users in their midst and inside that society incredibly cruelty and brutality.  A new aspect to a magical child’s education is unveiled, a dark side to a proper education that creates a horror called an Obscurus.  Perhaps it’s the fear of these creatures that leads to the friction between pureblood magical families and the so called “mudbloods”.  This is all layered atop the crisis that opens the film and is shaking the entire Magical World: the Dark Wizard Gellert Grindelwald and his revolution. 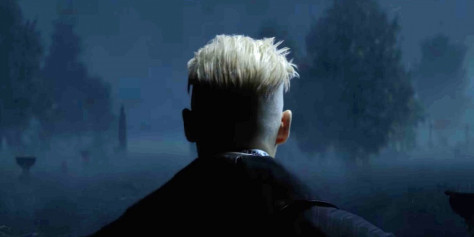 Grindelwald is mentioned in the very first Potter movie on the back of Albus Dumbledore’s chocolate frog card: that he was defeated in an epic battle by Dumbledore in 1945.  Voldemort sought to live forever in the Potter books and the method by which he hoped to do this were the Deathly Hallows; something Grindelwald is also obsessed with, but furthermore, his crusade seems more unhinged than Voldemort’s.  Voldemort was obsessed with himself and his well-being; Grindelwald thinks the magical community should be the ruling class even if extermination of the no-majs is the way to obtain it.  This is not a children’s movie.  Most parents may not care, but there are some very terrifying and creepy scenes, which I wouldn’t have expected so I pass along the warning to those with tots. 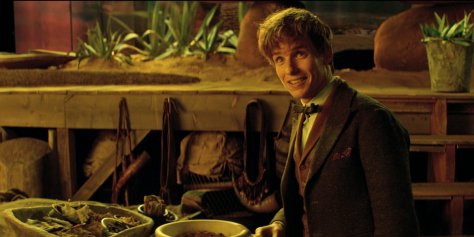 The thing I may like the most about Fantastic Beasts is that I have no idea where we’re going next by the time the film ends.  We know the five films will span 1926-1945.  We know Dumbledore (and the casting of the new Dumbledore is no doubt underway) appears in the second film, and obviously will be a fixture as we’re building toward that showdown in 1945.  I honestly don’t even know what the title will be for the sequel or what this five film series is going to be called because Rowling opens up a wide road that could go a lot of places.  Grindelwald is barely mentioned in the films, but he is discussed in the last Potter book.  We’re going to know a lot more about him and about a younger Albus Dumbledore (already an established teacher at Hogwarts even in 1926) before we’re through.  For those who have followed Rowling’s comments about the character after the series was complete and know her politics, you wonder how much of that is going to get into the films. Beasts leaves you with a million questions after having a great time and that’s not a complaint at all.  I’d almost forgotten how much I missed this world.  I’m so glad it’s back.
9.25/10 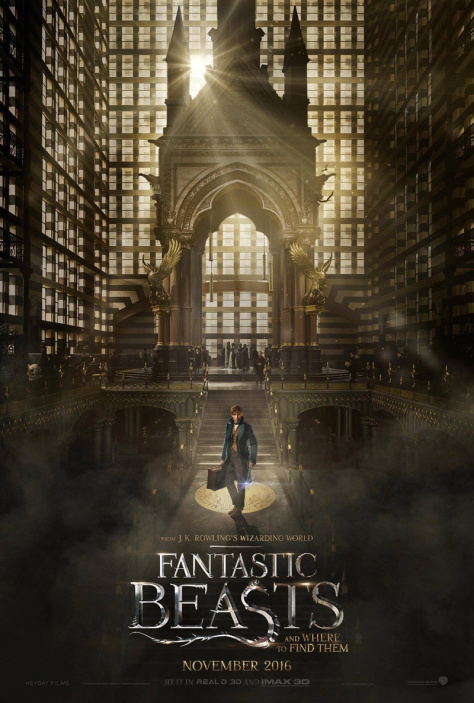 10 thoughts on “Movie Review: Fantastic Beasts and Where to Find Them (2016) *A Triumphant Return to the Wizarding World!*”